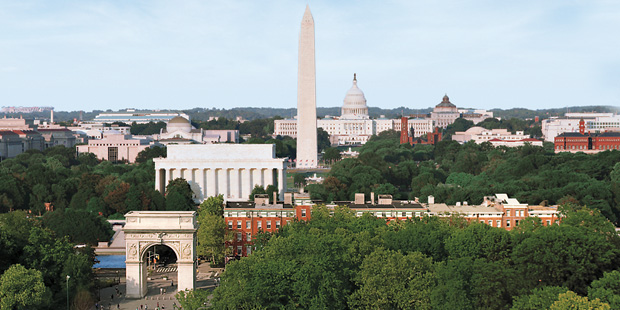 The highly ordered world of legal theory can seem far removed from the hard-nosed, policy-driven ethos of Washington, D.C. Recently, however, a host of leading public figures from the federal government have bridged that distance by teaching at NYU Law. It’s a golden opportunity for students to learn how things get done in the capital.

The visitors from Washington span political parties and ideologies. For example, President George H. W. Bush’s former White House counsel C. Boyden Gray focuses his class on how energy issues affect international security, while Robert Bauer, who stepped down as White House counsel in June, but serves as general counsel to President Barack Obama’s reelection campaign and the Democratic National Committee, teaches a seminar on Law and the Electoral Process. Douglas Ginsburg and Sally Katzen, who served as the Office of Management and Budget’s administrator of the Office of Information and Regulatory Affairs in the Reagan and Clinton administrations, respectively, will each teach a 1L course, the Administrative and Regulatory State, this spring. Judge Ginsburg’s current colleague on the U.S. Court of Appeals for the District of Columbia Circuit, Judge Harry Edwards, was appointed by President Carter. Edwards’s classes elucidate the appellate process as well as the art of decisionmaking from the bench.

Hearing stories firsthand of the crafting of major policy initiatives or of dealing with political heat and a media hungry for a story not only demystifies federal government, but also allows students to imagine themselves in these roles. Martha Roberts ’12, a student in Katzen’s seminar last spring, the aptly named How Washington Really Works, says, “You get a more complete picture of who affects the regulatory process and the ways you can influence it—through comments or meetings, through different jobs. She’s also really good at challenging assumptions that you have about how things should work.” For those interested in pursuing government careers, having their eyes opened also may simply open doors.

Regulars on the Acela Express

Nine distinguished federal public servants who have recently taught or are currently teaching as adjunct or visiting professors, and a sampling of their courses.