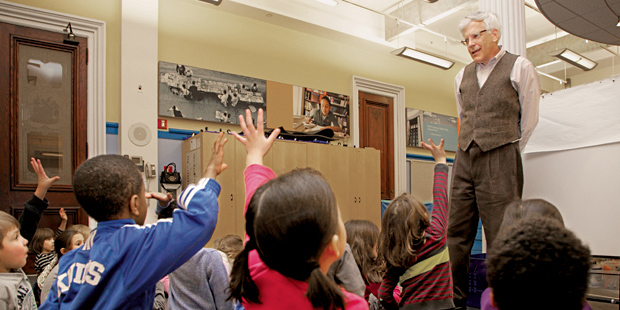 Veteran lawyer Peter Levin has shifted from restructuring debt to improving public education, one block at a time.

Given the location—inside the former Tweed Courthouse—you might assume that Peter Levin ’81 is doing something related to law in this warm and bright room. Instead, Levin is putting yellow tape on a blue floor, marking spots where his 23 kindergarten students will sit upon their return from lunch. The tape acts as a guide to “reduce marginally the level of chaos,” he says with a grin. It does the trick for most of the five-year-olds, with just a few needing a gentle reminder from their teacher.

Levin, a partner at Davis Polk from 1989 to 2010 and currently senior counsel at the firm, is at full throttle in a second career as an early-childhood and elementary school teacher at PS 343. A native New Yorker who attended private schools and, with his wife, raised two sons who also attended private schools, Levin changed careers partly because he wanted to “know what options were available to children who don’t have the resources that my children had” and to “investigate” the political debate surrounding public education by gaining practical teaching experience.

“For many of the people who first created public schools 180 years ago, universal free public education was the key to a successful democratic society,” Levin says. “If they were right, what happens to that society if public education is failing?”

That kind of thoughtfulness and commitment, not to mention his successful legal career, makes Levin an attractive hire in public education. “It’s exciting to have him here,” Principal Maggie Siena says, calling Levin “a consummate professional.” Siena worked with Levin at PS 150 in Tribeca, where she was principal and he worked as an assistant fourth- and fifth-grade teacher. When she was tapped to open PS 343 in the renovated courthouse last fall, she invited him to join her. “The kids respond well to him,” she says, “and he has a very good sense of who they are.”

For Levin’s kindergarteners, the afternoon activity is building with blue foam blocks, some as big as the children. With their teacher’s help, the kids plan what kinds of structures they want to build and choose teams, then the room erupts in noisy activity. Soon, where there were just blocks sit pony castles and jungles.

Although it looks spontaneous, the activity is carefully designed—drawing on a graduate course at Bank Street College, where Levin recently earned joint master’s degrees in early-childhood and elementary education. “Play is a very important way for the kids to learn,” Levin explains. “The blocks can teach the kids a host of things, such as counting or science—how many blocks does it take to build a structure? How are you going to keep up the blocks?”

Restructuring blocks is a far cry from restructuring debt for titans like Bank of America and JPMorgan Chase. As a partner in Davis Polk’s Credit Group, Levin advised clients on complex financial problems including the collapses of “lots of things that were not supposed to collapse,” in his words, such as Argentina, Bear Stearns, Bethlehem Steel, Enron, and many more.

At the firm, his “legendary encyclopedic knowledge of law,” says partner Jason Kyrwood, was coupled with a genuine interest in the well-being of young associates: “If you had a personal or professional issue, he would take the time to talk it over and offer frank, useful advice.”

Teaching as a second career has long been Levin’s plan. “I knew when I was in fourth or fifth grade that I wanted to teach, but only after I’d done a lot of other things,” he says. His teachers “brought the world into the classroom.” A Spanish teacher served in the Spanish merchant marine, and an English teacher was a member of the Royal Shakespeare Company. As a senior in high school, Levin helped teach ninth-grade English. Levin chose NYU Law because so many of its professors had real-world experience. He remembers Professor John Slain ’55 as a “perfect example of someone who had done a lot of other things,” including practicing law at a firm, serving as general counsel of a public company, and in 1980 co-authoring a seminal law book, Agency, Partnership, and Employment: A Transactional Approach.

Levin’s pro bono work often has an educational slant. He has done work for the Lincoln Center Institute, which provides curricula for schools. Recently, he joined the board of School Year Abroad, of which one of his sons and three nieces are alumni.

For Anna Hayes Levin ’80, who met her spouse when both were undergraduates at Yale, his gear switching makes complete sense. After her own career as general counsel for LVMH and a partner at the Battle Fowler law firm, she left to serve on Manhattan Community Board No. 4 from 2001 to 2009 and now sits on the New York City Planning Commission. “It’s always been important for us to do something for our community,” she says. “Besides, changing careers is intellectually rejuvenating. As a friend once said, every plant needs to be repotted.”

For Peter Levin, there is also the immense satisfaction of positively influencing a young life. “There are children who arrive with a range of emotional situations,” he says. “When you’ve succeeded, you see the light go on. They radiate back to you how well you’ve done.”

He adds: “Most of them don’t have a clue what I did before. And to them it doesn’t really matter.” Or, as one kindergartener put it, “Peter’s awesome.” Eyes widening, he leans forward and whispers, “He lets us dissect fish.”