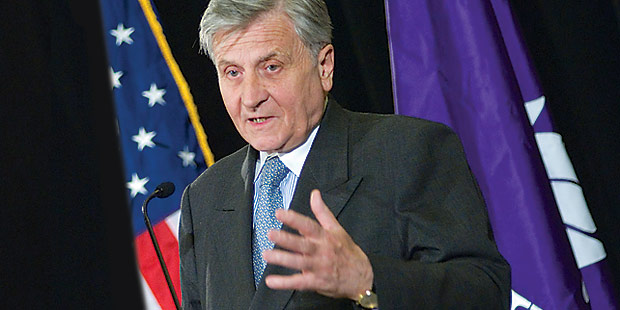 The last eighteen months have not been kind to the U.S. economy. The collapse of American subprime asset-backed securities have left housing numbers weak and financial institutions continuing asset write-downs; the economic future remains uncertain.

Prominent domestic and global policy makers who participated in the NYU School of Law’s second annual Global Economic Policy Forum (GEPF) on April 14 addressed the worldwide effects of the downturn. Jean-Claude Trichet, president of the European Central Bank, gave the keynote address with a decidedly international focus, expressing concern about wobbling global markets and emphasizing that only an immediate, global response could revive them.

The GEPF program, cochaired by Stuyvesant P. Comfort Professor of Law Geoffrey Miller, director of the Center for the Study of Central Banks, and Adjunct Professor Alan N. Rechtschaffen, was split into two sessions. In the first, participants discussed domestic policies, and, in the other, international responses to the ongoing turmoil in the U.S. economy and its reverberations in world financial markets. Domestic panel speakers included Donald Marron, senior economic adviser on the President’s Council of Economic Advisers; Tevi Troy, deputy secretary of the U.S. Department of Health and Human Services, and Kevin Warsh, member of the Board of Governors of the Federal Reserve System.

Warsh and Marron cited actions that the Federal Reserve and the Bush administration have taken to ameliorate volatile credit and financial markets and boost the sluggish U.S. economy. However, they said it would take time for these policies to become effective. For example, the Federal Reserve had cut interest rates by three and a quarter percentage points between September 2007 and May 2008, and it has offered banks hundreds of billions of dollars in liquidity to keep their credit flowing. The U.S. government passed a $150 billion fiscal stimulus plan in February, which provided tax incentives to encourage businesses to spend, as well as stimulus checks ranging from $300 to $1200 per household, mailed in late April. Marron said he expects these two moves to add 500,000 to 600,000 jobs to the economy, but not until the end of 2008. “People sometimes forget how quickly we’ve reacted, given some of the delays that are involved,” Marron said.

Most importantly, it will take time for the full impact of the Fed’s rate cuts to be felt, Marron said. Fed studies show that it takes a year after rate cuts are implemented for half of their effects to be felt in the economy. Therefore, he said, the Fed’s rate cuts from the past several months should make a noticeable difference in the economy during the second half of this year and the start of 2009. Though not back up to speed yet, credit markets have already shown “early, encouraging signs of repair,” Warsh asserted. “Our tools are incredibly powerful, but they don’t work overnight.”

In the immediate aftermath of the rate cuts, however, high oil and other commodity prices have made consumer prices higher, causing inflation concern in recent months. Until credit markets regain their stability, more financial shocks could take place in the near future as companies continue to write-down overvalued assets, Warsh said. Already, the collapse of the subprime mortgage market has caused about $245 billion in asset write-downs and related credit losses.

Trichet referred to the recommendations from the April 11 Group of Seven Nations Conference, which called for more industry oversight and transparency, saying that financial institutions should immediately disclose the extent of their losses. He also noted the need for continued cooperation among the world’s central banks, as well as greater regulatory oversight of the financial industry. “The present turbulences have, once more, demonstrated that opacity as regards markets, financial instruments and real situations of financial institutions is a recipe for catastrophe,” Trichet said.

Buoyed by an abundance of liquidity and profits, as well as the creation of increasingly sophisticated financial products, the beginnings of the current financial crisis began well before last August, when signs of U.S. mortgage related troubles began to show, Trichet said. At that time, market participants operated under the false assumption that asset prices would continue to climb indefinitely. “The much higher degree of contagion that followed stemmed from and was reinforced by [these] factors,” Trichet said.

Trichet commended U.S. Treasury Secretary Henry Paulson’s recent proposal to overhaul the American financial system’s structure, but said any solution to the current financial crisis must involve the commitment of many countries together. “The present turbulences are a global phenomenon,” Trichet said. “Only a global response can be effective.”