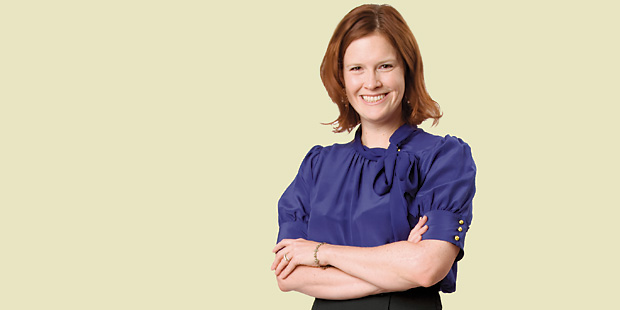 When Berkeley law student Joanna Lydgate was conducting empirical research on Mexican immigrants, Erin Murphy walked her through two intensive trips to the border to interview judges, defense attorneys and prosecutors. “Another professor had just told me, ‘good luck,’” said Lydgate, but Murphy also supervised the resulting comment that was published in the April 2010 California Law Review. That piece, which formed the basis of two policy reports and a hard-hitting Los Angeles Times op-ed, criticized a federal program aimed at criminally prosecuting undocumented immigrants who cross the U.S.-Mexico border.

Erin Murphy, who builds mentoring into her teaching relationships by requiring first-year students to attend her office hours, joins NYU Law as a tenured professor this fall from the University of California, Berkeley, School of Law where she could be spotted zipping around campus on a powder blue Vespa. A criminal justice scholar with a focus on forensic DNA typing and technology, Murphy, 36, has a reputation for being creative and energetic in the classroom. She experiments with technologies such as handheld voting devices, plays rap music, and shows videos of “The Wire” and other popular TV shows. And at the semester’s end, she organizes a criminal procedure “Jeopardy!”-style game and a criminal law-themed poetry slam. “She loves the material so much, it’s infectious,” says former student Josh Keesan, now a San Diego County public defender.

Murphy’s scholarship is influenced by her own years at the Public Defender Service for the District of Columbia, where she was part of a team of lawyers dedicated to understanding the ins and outs of forensic DNA typing. She found that the law responded clumsily when it came to regulating new technologies, as when debate focused on the intrusiveness of swabbing a suspect’s cheek rather than the question “What are we going to do with this information?” Two of Murphy’s articles, including her popular DNA primer “The Art in the Science of DNA: A Layperson’s Guide to the Subjectivity Inherent in Forensic DNA Typing” (Emory Law Journal, 2008), were cited in a 2009 concurring opinion by Supreme Court Justice Samuel Alito that denied a new DNA test for a convicted rapist. Murphy is currently working on “Relative Doubt: Partial Match of ‘Familial’ Searches of DNA Databases,” to be published in the Michigan Law Review, which examines the forensic method of locating partial DNA or possible kinship matches, when exact DNA matches to the crime scene sample are not found.

In “Paradigms of Restraint” (Duke Law Journal, 2008), which won an AALS “best paper” award, Murphy argued that the power to control criminals with new technologies can result in as great a deprivation of liberty as physical incarceration, but that the consequences of these methods have received little constitutional scrutiny. “It’s hard to assess the power of the monitoring eye of biometric systems or the virtual prison of a GPS alert,” writes Murphy. Says Murphy’s former Harvard Law School professor Carol Steiker: “She manages to think in broad terms about these technologies, but also talks with specificity about how the courts should address these problems.”

Murphy also looks at nontechnical questions with a fresh eye. “Manufacturing Crime: Process, Pretext and Criminal Justice” (Georgetown Law Journal, 2009) looks at prosecutors’ use of procedural offenses such as perjury, obstruction of justice and the like, to gain convictions when other evidence is weak. “It’s an extraordinarily insightful assessment of a development in criminal justice that many people knew about but that no one had thought about in the way Erin did,” says Berkeley colleague David Alan Sklansky.

Growing up in Windermere, Florida, Murphy inherited a joie de vivre and love of literature from her free-spirited mom, Carol, an English teacher and guidance counselor who, her daughter remembers, “thought it was fun to lower the windows in the car wash.” She and Murphy’s father J. Michael, a steel drum reconditioner with a Harvard M.B.A., raised Murphy and her brother with a sense of civic duty and a commitment to intellectual pursuits. Still, Murphy was no model student. Though she did well in high school, she’d skip classes that bored her, while seeking out extracurricular reading from teachers she admired. “I came to appreciate the real magic that a great teacher can do,” she says.

Studying law was never in doubt. “I’ve always been interested in the art of persuasion, and I love words,” says Murphy, who graduated from Dartmouth College with high honors in comparative literature. “Law allows me to use the beauty of language in service of something immensely important.” After earning her J.D. from Harvard Law in 1999, Murphy clerked for Judge Merrick B. Garland of the U.S. Court of Appeals for the District of Columbia Circuit, then worked at the Public Defender Service in D.C. for five years before joining the Berkeley law faculty in 2005. Murphy, who was a visiting professor at NYU Law last fall, says she was drawn to NYU Law because of New York City’s wealth of resources, and the collegiality of the faculty. “There are so many talented, amazing people who meet weekly, share their work and ideas, and talk over lunch,” she said. “That kind of fertile ground is an ideal place to plant yourself if you want to grow as a thinker.”

In June, Murphy married Jeremy Tinker, 37, an astrophysicist who will join NYU’s physics department as a research professor. “My biggest decision now,” she joked a few weeks after the wedding, “is whether the Vespa will have a place in Manhattan.”