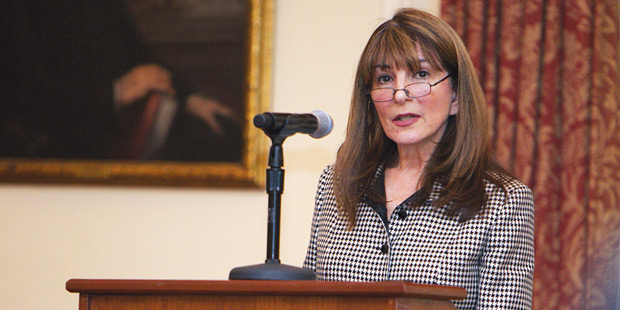 Law Women honored Trustee Virginia Molino ’76, general counsel of McKinsey & Company, as its 2015 Alumna of the Year. In accepting her award last March, Molino spoke to the gathered law students about dealing with conflict in the workplace, in particular while navigating gender expectations.

After graduating from NYU Law, Molino wanted to be a labor law specialist. “I knew from day one I wanted to be involved in collective bargaining agreements,” she said. She started out in the legal department of Suburban Propane Gas.

One of her first assignments was to meet with a local Teamsters union in what she called “a dimly lit, smoky hotel room, somewhere in New Jersey, late at night.” Molino was the only woman there. As she was about to present employment data and analytics, the head of the Teamsters asked her to serve coffee.

Knowing that management would need him to be reasonable in negotiations, and that she might have to deal with him again, she did not want to insult him. But, she said, “I needed him to come away knowing he could not unnerve me.” She decided to treat his request as a joke and move on.

Molino noted that the open hostility toward women that she encountered in her early career is rare today, but there nevertheless remain unconscious biases and implicit gender expectations in the workplace. She emphasized three major tools for dealing with workplace conflict: giving people the benefit of the doubt, the value of optimism and positive thinking, and the importance of working to find common ground.

These tools served Molino well in her career; she was eventually elected general counsel of the Suburban Propane Gas Corp. before joining McKinsey & Company to serve as its first general counsel. Now, with more than 30 years of experience as a general counsel, Molino oversees a staff of approximately 40 lawyers and 25 contract professionals and paralegals located in 15 offices around the world.