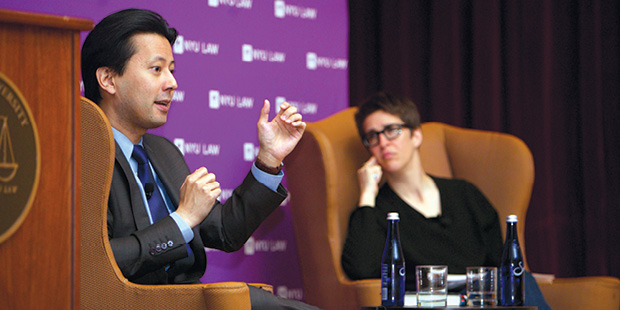 The Truth in the Transcript

On June 26, 2013, the Supreme Court decided United States v. Windsor, striking down a provision of the Defense of Marriage Act that barred the federal government from recognizing same-sex marriages. The decision triggered a sea change. Post-Windsor, courts swept away same-sex marriage bans in 22 states. Within the next two years a majority—36 states and the District of Columbia—recognized same-sex marriage.

On the second anniversary of Windsor, the Supreme Court held in Obergefell v. Hodges that same-sex couples have a constitutional right to marry.

Windsor’s far-reaching impact notwithstanding, Kenji Yoshino, Chief Justice Earl Warren Professor of Constitutional Law, maintains that another case, decided on that same summer day—Hollingsworth v. Perry—deserves to have as strong a legacy. In his book Speak Now: Marriage Equality on Trial, Yoshino argues that the Perry trial was “the most rigorous, comprehensive, and thoughtful conversation we’ve ever had in any forum on same-sex marriage in the country.” Because the trial was able to strip away half-truths to get at the facts of same-sex marriage, he says, the “next great legal controversy” should be tried in the courtroom, not hashed out by politicians or even decided via any other legal process without trial.

Video: What is the value of a civil trial, and how does a trial differ from other kinds of public debate?

Yoshino came to the trial record shortly after August 4, 2010, when Vaughn Walker, the now-retired chief judge of the US District Court for the Northern District of California, ruled that California’s Proposition 8, which amended the state constitution to define marriage as between a man and a woman, violated the equal protection and due process clauses of the 14th Amendment to the US Constitution.

Intrigued by the judge’s “unusually thorough opinion,” Yoshino had a librarian pull all 13 volumes of the trial record. After blasting through the 3,000-page transcript, he says, “it struck me that this was a shining civil rights document that needed to be brought to the public.”

The Supreme Court ultimately disposed of Perry on procedural grounds, dodging the substantive constitutional issue while letting same-sex marriage proceed in California. Yoshino’s book revisits not only the arguments but also the human dramas that animated them throughout the 12-day trial. (In the book he also intersperses personal reflections on his own life; between the filing of the case and the Supreme Court’s decision, Yoshino married Ron Stoneham, and the couple welcomed two children.)

Yoshino draws a sharp contrast between the rigorous trial proceedings and what he deems the misleading ad campaigns that convinced 52 percent of voters to say “yes” to Proposition 8. “I want to drive a wedge between the question of where the most democratically legitimate conversation happens, which I think is open to debate, and where the best conversation happens, which I don’t think is open for debate,” Yoshino says.

“In media debates, or even academic debates, a smart person can always run out the clock or pivot away from the question and not really have to answer it,” he adds. “Whereas if you’re on the stand, under oath, under penalty of perjury, and you’re being cross-examined for open-ended periods of time, you simply have to answer the question.”

Yoshino claims that, faced with such scrutiny, the Proposition 8 proponents’ arguments against same-sex marriage withered, and, under cross-examination, so did their experts. For example, proponents argued that same-sex marriage would lead to the “deinstitutionalization” of marriage by robbing it of public regard and commitment. But during cross-examination by plaintiffs’ lawyer David Boies LLM ’67, one of the proponents’ expert witnesses admitted that marriage has already been deinstitutionalized.

Given our justice system today, the odds were against Perry ever seeing the inside of a courtroom; less than two percent of civil cases filed in federal court make it to trial, according to the American Bar Association. Speak Now, then, serves a dual purpose: It is a paean to the dying civil trial and a vehicle to convey the Perry arguments, in a digestible form, to readers.

Five years after Perry, Yoshino stands by his commitment to the power of the trial record: “Something happened in those 12 days in that tiny courtroom in San Francisco that deserves to have a life.”