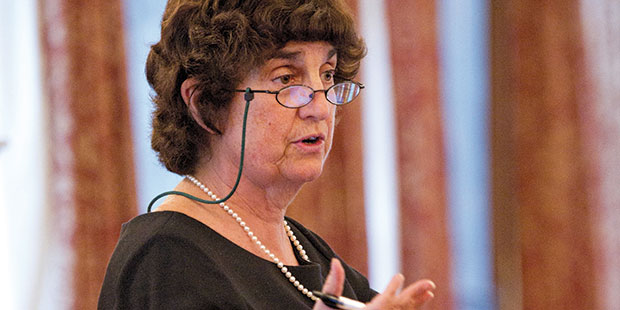 Chief Judge Patti Saris of the US District Court for the District of Massachusetts, chair of the US Sentencing Commission, delivered the closing keynote for the Center on the Administration of Criminal Law’s seventh annual conference, “Drawing the Line Between Civil and Criminal Punishment: Regulatory and Criminal Offenses,” last April.

The commission provides federal courts with advisory sentencing guidelines to ensure fairer and more consistent sentences for federal crimes. In her keynote, Saris detailed how the commission investigated and revised the economic fraud guideline in response to criticisms that it was “fundamentally broken.”

Ultimately, the commissioners agreed that while the guideline was not broken per se, they would amend it to place greater emphasis on the “quality of harm” done, not just the number of victims; the offender’s intent to do harm; and whether the offender had been a minimal participant.

Saris (pictured, above) framed this outcome as a triumph for the commission’s design: “We believe that our feedback loop worked as intended here, where stakeholders identify real problems and the commission researches, analyzes, and addresses them.”

Appearing at one of two NYU Law events in April, the DOJ’s Leslie Caldwell presented another facet of managing punishment, discussing criminal law enforcement in cases that may also involve regulatory enforcement.

The conference marked the center’s first major event under the executive directorship of Deborah Gramiccioni, most recently deputy executive director at the Port Authority of New York & New Jersey and a former federal prosecutor.