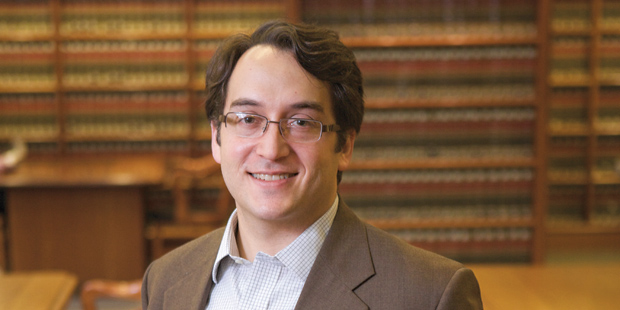 A working paper by Ryan Goodman, Anne and Joel Ehrenkranz Professor of Law, drew intense and high-profile interest shortly after it was posted on the Social Science Research Network last winter. Ranked as one of the most downloaded SSRN articles in multiple categories and now slated for publication in the European Journal of International Law this fall, “The Power to Kill or Capture Enemy Combatants” cogently spells out how, contrary to many experts’ opinions, combatants should not automatically be subject to lethal force upon discovery, regardless of where they are found. Rather, Goodman said, the modern law of armed conflict (LOAC) requires that “if enemy combatants can be put out of action by capturing them, they should not be injured; if they can be put out of action by injury, they should not be killed; and if they can be put out of action by light injury, grave injury should be avoided.”

Goodman stated the matter more bluntly in a February 19 Slate piece, “The Lesser Evil,” in reference to the Obama administration’s leaked white paper on drones. “The administration claims, in the white paper, to have conducted an exhaustive review of the laws of war, and to honor those standards,” he wrote. “Its portrayal of the rules, however, is incomplete to the point of being wrong.” According to the Justice Department white paper, the government has discretion in wartime to choose whether to kill an enemy combatant, but Goodman contests that modern laws of war place real limits on that choice. He supports his contention by tracing a “lost history” of international legal authorities’ past support for restraints on the use of force, calling his claim “consistent with a long line of some of the most highly respected law of war experts who reached the same conclusion on this issue.”

Unsurprisingly, Goodman’s challenge to current conventional wisdom provoked strong reactions, both pro and con, from well-known scholars in the field of warfare. On the Lawfare blog, Professor Jack Goldsmith of Harvard Law School, former special counsel to the Defense Department, called Goodman’s work “timely and important.” A series of responses from prominent thinkers spurred a point-by-point debate between Goodman and his critics in several forums. And at least one powerful military voice took note of Goodman’s assertions: in his official blog as the Air Force’s general counsel, Charles Blanchard wrote that the vigorous exchange Goodman had inspired is “worth a careful read by all of us LOAC wonks.”