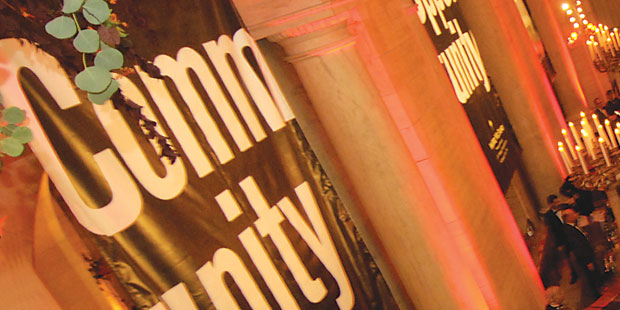 More than 300 alumni and guests of the NYU School of Law went to the New York Public Library last September to cheer the launch of an audacious $400 million capital campaign, the largest in the school’s history. Lights swept the skies as alumni, faculty and friends strolled up the library’s red-carpeted grand stairway. Walking past the building’s majestic columns, which were bathed, for the evening, in violet light, guests stepped into the Astor Hall for cocktails and hors d’oeuvres where one-story-tall banners proclaimed the campaign’s central values: opportunity, community and leadership.

“We wowed them on Fifth Avenue tonight,” said Eileen FitzGerald Sudler ’74, chair of the Dean’s Strategic Council and member of the Campaign Steering Committee, as she and committee comember Kenneth Raisler ’76 introduced the specifics of the campaign. Marking the end of the campaign’s silent fund-raising phase, during which some $165 million was raised, the gala ushered in the public phase by identifying the Law School’s plans for expanding student aid and supporting numerous faculty projects. The money raised—more than $200 million by last spring—will fund scholarships for both J.D. and LL.M. candidates, and help endow the school’s distinctive Loan Repayment Assistance Program and summer public interest grants, allowing students to explore and then pursue highly competitive yet low-paying jobs that contribute to the greater good. Campaign funds will also be used to hire new faculty, increase the number of chaired professorships and support the work of the Law School’s faculty-run centers and institutes. Finally, the campaign aims to increase alumni participation and to double the size of annual cash gifts.

“In a remarkably short span of time, NYU School of Law has moved into the small handful of schools at the very top tier of legal education,” said Dean Richard Revesz. “We have achieved this great success by pursuing a distinctive path in legal education. The campaign will ensure that we continue on this steep trajectory.”

The founder of the progressive AnBryce Scholarship and the campaign’s chair, Trustee Anthony Welters ’77, spoke about the sense of pride and elation that accompanies supporting education. “There is nothing more fulfilling than touching someone’s life,” Welters said as he introduced a film that conveyed how NYU impacts the lives of those who study and work here, and so many others who are part of the Law School community. Sudler and Raisler took the stage at the end of the evening to give the assembled alumni something they hadn’t had in some time—a homework assignment. Their task: to reconnect with an old classmate and tell that graduate about all that is happening at their alma mater. If those personal ties are reestablished, promised Raisler, opportunity, community and leadership will continue to thrive on Washington Square.