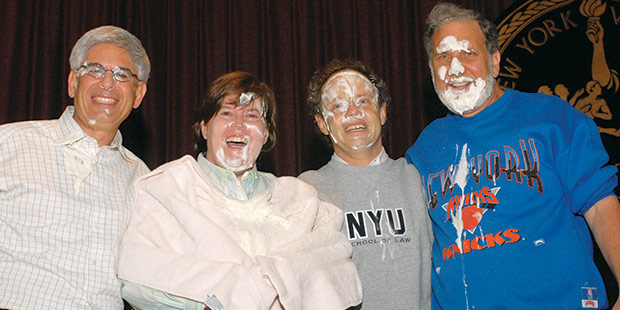 Oliver Carter ’06, the Student Bar Association president and ersatz auctioneer, stood next to a grinning Dean Richard Revesz on the stage of Tishman Auditorium during the Public Service Auction last March. Carter pointed into the crowd, taking bids on the last item of the night: the privilege of throwing pies in the faces of Revesz and NYU President John Sexton.

“How much do you hate pie, Dean Revesz?” Carter asked.

“Lots!” replied Revesz, as the bids kept rolling in.

Too bad for the dean, because he and Sexton were about to square off against Jay Neveloff ’74 and Beverly Farrell ’01 in an impromptu pie fight that brought in $1,050 to benefit the Law School’s summer programs in public interest.

In the end more than $139,000 was raised, making this year’s auction the most successful in the history of the event. Alumni helped plan this auction—a first—and their participation was a big reason for the record-breaking outcome. The 22-person alumni auction committee, chaired by Neveloff and his wife, Arlene, worked with students to solicit donated items from members of the community for both the silent and live auctions. As a result of their efforts, the auction itself was awarded the President’s Service Award for Volunteerism and Community Service, which recognizes outstanding efforts to support charitable causes at the university, and in the greater community of New York City.

The alumni effort was also reflected in the greater variety and sophistication of the prizes. During the silent auction, held in Greenberg Lounge, guests bid on weekend getaways to Colorado’s Beaver Creek resort, vintage Bordeaux and dinners at top restaurants such as Babbo and Lever House.

The stakes were raised in Tishman when guest auctioneers Jason Washington ’07 and Professors Cynthia Estlund and Samuel Issacharoff brought bidders to their feet, pitting students against alumni for extravagant prizes.

A night of tournament poker with World Series of Poker record-setter Wendeen Eolis went for $2,500, while a diamond necklace from M. Fabrikant & Sons was snatched up for $6,000. The night’s largest bid, commanding an impressive $6,700, fetched a pair of Super Bowl tickets and VIP passes to a Friday night pre-game party in Miami.

“It was gratifying to see the superb job the student committee did, and the overwhelming support of the faculty and alumni,” Neveloff said, adding, “besides, where else can you see President Sexton and Dean Revesz getting pies thrown in their faces?”