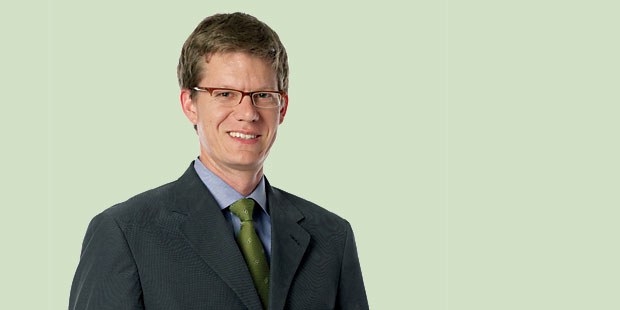 Even dutiful students tend to approach introductory tax law like they would a bitter medicine: hoping to get done with the distasteful task as fast as possible. But when students of then-Visiting Professor Mitchell Kane’s class last fall swallowed their first dose, they asked for more, following him after class to a conference room where he held court on the tax ramifications of stock options.

Kane sees this general enthusiasm for the subject as natural. “This is a body of law that tells you who’s going to pay for what. That goes to the core of what a lot of people care about,” he says.

Previously in private practice specializing in international tax law, Kane joins the faculty this fall from the University of Virginia School of Law, where he has taught since 2003. “He’s one of the best junior tax scholars in the country, and clearly the best in international tax, leaving aside a handful of people who are considerably more senior,” says Daniel Shaviro, Wayne Perry Professor of Taxation. “Mitchell is thus positioned to be an important leader in the field for decades to come, and I’m delighted that he’ll be here.”

Kane is best known for his 2004 piece, “Strategy and Cooperation in National Responses to International Tax Arbitrage,” published in the Emory Law Journal. International tax arbitrage refers to instances where taxpayers intentionally structure transactions to take advantage of variations in the tax laws across jurisdictions. The academic debate about such arbitrage had generally centered on the question of whether such tax planning activity is problematic. “My key contribution was to suggest that one could best understand arbitrage transactions not as planning opportunities for taxpayers, but rather as opportunities for governments, in their responses to the transactions, to behave strategically in the battle to attract global capital flows,” he says.

Recently, Kane has cultivated an interest in the role of tax policy in promoting capital flows to the developing world. In a working paper called “Bootstraps, Poverty Traps, and Poverty Pits: Tax Treaties as Novel Tools for Development Finance,” Kane proposes a financing technique that he says offers significant improvements over common sovereign debt arrangements. Typically, countries that attract foreign investors to build a plant or another business have the primary ability to tax any profits. These tax revenues are used to repay foreign creditors, as well as for other purposes. Rather than waiting for a payment from a country that might already be in debt, Kane proposes that developed nations negotiate treaties in which they transfer capital now in exchange for the primary right to tax income streams in the future. Critics contend “they’re trading back a piece of their sovereignty,” says Kane. But he argues, “It’s a sovereign decision to raise money more effectively. By world standards, our tax and compliance system is a pretty good machine.” So why not leave the taxing up to us?

Kane and his two siblings were raised in Norfolk, Virginia, by their parents Peter, 70, and Claudia, 64. An engineer by training, Peter now owns a family bar/restaurant; Claudia, who also owns a deli, was a food broker. A self-professed loner and nerd for most of his youth—in sixth grade he tackled Fyodor Dostoevsky’s The Brothers Karamazov—he came out of his shell in 11th grade when he joined the school’s golf team.

Kane entered Yale University interested in computer science, but soon became enamored with philosophy. By sophomore year, he was a philosophy major with a focus on the philosophy of law—having read Ronald Dworkin’s work—as well as the philosophy of criminal law.

Graduating from Yale in 1993, he enrolled in a joint degree program at the University of Virginia, earning his J.D. in 1996, and an M.A. in philosophy in 1997. That same year he started practice at the D.C. office of Covington & Burling, splitting his time between tax and litigation. Two weeks into his first litigation case, he was given boxes of documents to review. “After the first two boxes, I begged to be put full-time into the tax group,” he recalls, finding the mental gymnastics required to puzzle through the tax code far more compelling than “plowing through mounds of paper looking for a needle in a haystack.”

Out to lunch one day with his tax colleagues in 1999, he learned that his firm wanted to bring an associate to London. He raced back to his office to call his wife, Jessica. “We adored living abroad,” says Kane, whose practice morphed into international tax law during his three years in London.

In 2002, after Kane returned to the U.S., a mentor invited him to take a fellowship at the University of Virginia. He was offered a teaching position the following year. “I was 32 when I started, and the students didn’t look much younger than I did. It was incredibly intimidating,” recalls Kane, who spent two months preparing his first three lectures.

In addition to visiting in Fall 2007, Kane has attended NYU’s annual Colloquium on Tax Policy and Public Finance. “The energy of the place is incredible,” he says. “There’s something about NYU where I always feel like there’s 30 things going on that I want to be doing. That kind of richness of faculty dialogue is very appealing.” Aside from working with his tax colleagues, he hopes to rekindle his interest in philosophy by attending and presenting the Colloquium in Legal, Political and Social Philosophy, run by Professors Dworkin, Liam Murphy and Thomas Nagel.

Having been a visiting professor at several universities in the past two years, including Harvard and Columbia, Kane is eager to settle down with Jessica and their children: Olivia, five, and Simon, two. Kane, who inherited recipes from his Alsatian mother, does the cooking at home. “I’m the master of the one-pot, stick-to-your-ribs, French country recipes,” he says.