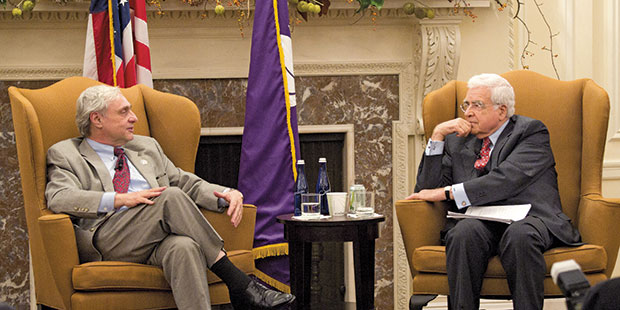 When a consumer as prominent as Chief Judge Alex Kozinski of the US Court of Appeals for the Ninth Circuit is a member of a class action lawsuit, lawyers on both sides of the case should check their blind spots. For the Center on Civil Justice’s fall conference, Kozinski (pictured above, left) sat down with University Professor Arthur Miller (above, right) to recount his disappointment about Klee et al. v. Nissan North America as one of 18,000 estimated consumers in the class.

Kozinski conceded that class actions level the playing field when a consumer has a claim against a multimillion-dollar corporation. Nonetheless, he was of “mixed mind” about their utility.

In Kozinski’s case, Nissan had mailed him an extended warranty to compensate for the poor battery performance of his all-electric Nissan Leaf. Months later he learned that a consumer class action settlement was awarding him that very warranty.

“Getting five dollars in the mail or getting a coupon for future purposes or getting preferential treatment in the future—those are not real benefits,” he said. Here, the settlement did one worse: it seemed to be giving him something he already owned. Kozinski and his wife, Marcy Tiffany, responded with a blistering 36-page protest to the proposed settlement.

Kozinski suggested that Rule 23 of the Federal Rules of Civil Procedure, which authorizes class actions, may need to be rewritten from scratch. If the legal community can recognize that class actions rarely benefit the consumer, Kozinski offered, perhaps funds won via such cases should be distributed to other parties (and benefit all taxpayers).