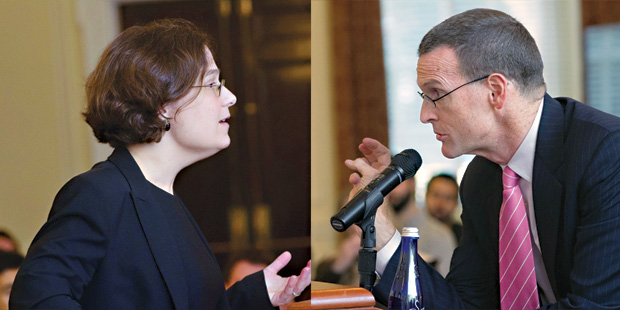 Arguing for the petitioner, Hills said that regulating a certain category of animal interferes with the operations of a slaughterhouse: “For the states to define a type of animal in terms of the very ailment over which the feds have exclusive jurisdiction is to circumvent preemption through a pretext.”

Representing the respondent, Sharkey asserted that “states have the prerogative to regulate, if they so choose, anything going on with respect to animals on farms and as a general matter, and the federal government has no interest at the present time in doing so.”

Smith and Epstein deliberated publicly through open microphones for the audience. Epstein felt that while the trade association might win on the merits of the case, it had not demonstrated irreparable harm. Smith was even more ambivalent: “It’s a close case. If it’s a pure ethical problem like ‘We don’t kill horses,’ that’s an easy case, and if it’s a pure health problem like ‘We’re going to inspect for mad cow disease,’ that’s easy the other way. I’m not quite sure whether a non-ambulatory pig is more like a mad cow or a horse.”

While the moot judges stopped short of a firm ruling, they both expected the Supreme Court to uphold the Ninth Circuit ruling for the defendants. “My guess is it will be affirmed,” said Epstein. “I would affirm it and I would go to bed feeling very uneasy about the decision.” He need not have worried, however. Four months later, the Supreme Court rejected the earlier circuit decision, ruling 9–0 for the National Meat Association.