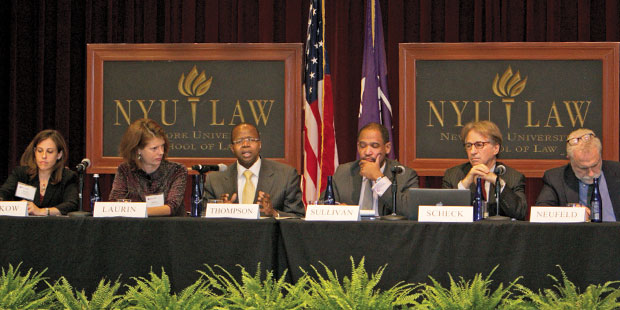 A Matter of Convictions

To lead Brooklyn’s new conviction review unit, Thompson tapped Sullivan, a former staff attorney for the District of Columbia Public Defender Service. Sullivan spoke to the importance of creating a non-adversarial atmosphere between the conviction review unit and the rest of the district attorney’s office. “The people in the unit have to believe that the job of the prosecutor is about justice,” Sullivan said. “Sometimes that means putting people in jail. Sometimes that means getting people out of jail. But it’s all about justice.”

Scheck commended Thompson for bringing in a defense lawyer to help structure the conviction review unit. But Scheck also argued that in addition to overturning wrongful convictions, it’s key that prosecutors do an extensive review of the failures in the system that have led to the incarceration of the innocent. “When bad things happen in a complex system, it’s rarely a single slip-up,” Scheck said.

Wrongful convictions often stem from a systemic pattern of errors, said Laurin, whose research focuses on the regulation of criminal justice institutions. These errors include faulty witness identification, false confessions, and poor conduct on the part of prosecutors, among others.

Neufeld brought up the “3,000-pound elephant sitting in the corner”: the role of race in wrongful convictions. “It’s not a coincidence that 70 percent of our exoneration—the DNA exonerations—involve people of color,” he said. “Unlike other risk factors, we don’t have a recommendation for a remedy, but we as a nation have to come up with one.”