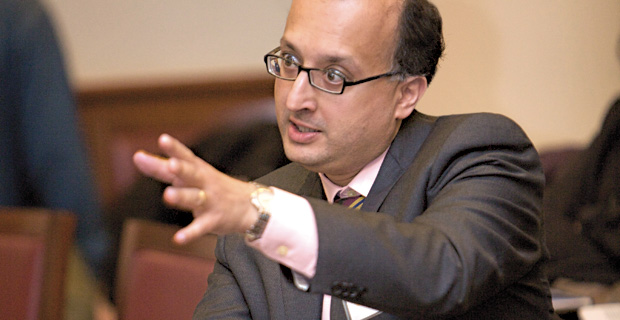 When Sujit Choudhry, Cecelia Goetz Professor of Law, headed to Sri Lanka in 2003, he knew his task was to advise on constitutional design for a nation still rebuilding after decades of civil war. But it wasn’t until after he had already landed, driven across the island in a van, and begun briefing sessions with local stakeholders that the key question facing the nation’s constitution finally emerged: What role would law enforcement have in the federal state?

Scholars had already developed comparative models for this problem using Northern Ireland and Bosnia, but while in Sri Lanka, Choudhry was unable to access this work. “I did the best I could,” he says.

For comparative constitutional specialists, fieldwork usually involves little advance notice, minimal support, and a bare-bones technology infrastructure. “This sense of being at sea and not being able to get to the knowledge that already exists is an experience that a lot of advisers have,” says Choudhry. Without the relevant research, advisers are hampered in their efforts to inform and counsel.

To address this problem, the professor has launched the Center for Constitutional Transitions, an academic center that will provide research support and infrastructure for scholars in the field—in short, a back office that also produces scholarship. Staffed by 12 J.D.s and eight LL.M.s based in New York and eight researchers in Cairo and Beirut, the center will first tackle approximately three projects for the Cairo office of the International Institute for Democracy and Electoral Assistance (International IDEA). Two projects have emerged already: One will focus on how constitutions in Middle Eastern and North African countries should regulate political parties, while another will explore the question of executive-legislative relations in the context of the Arab Spring. The LL.M.s in particular, many of whom have held clerkships in their home countries, are a major strength of the clinic, says Choudhry.

The center has already hosted two events this spring: a symposium about the trajectories of Arab constitutionalism and an event focusing on current constitutional reforms in Turkey. Scholars came from American as well as Turkish universities.

Although the Arab Spring has dominated recent headlines, constitutional design is an evergreen field, and Choudhry’s longterm vision for Constitutional Transitions includes expanding beyond the Middle East. He hopes international agencies will be attracted to his center’s value proposition: the ability to dramatically enhance the existing efforts with a research infrastructure. International IDEA, the center’s first client, will fund a fellow who will oversee students at the center.

Choudhry first piloted the idea for a research back office on a trip to Nepal in 2010. Enlisting the help of a law student in Toronto, who wrote memos for Choudhry each night, the law professor was able to deliver a successful talk about self-determination in the context of Nepal’s indigenous peoples. Because Choudhry was so well prepared, he was able to reframe the conversation by puncturing some myths about the international laws regarding the self-determination of indigenous peoples. “Knowledge is power,” says Choudhry.