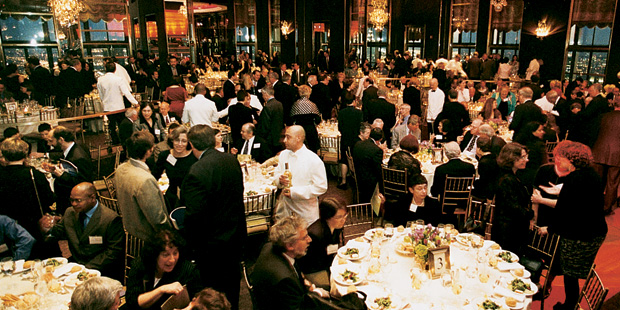 The Root-Tilden-Kern Scholarship Program celebrated its 50th anniversary last spring with a day of panels about the current state of public interest law followed by an evening of celebration at the Rainbow Room. Keynote speaker Professor Alexander Boraine set the tone for the reunion by talking about what motivates people to fight for human rights. Boraine, the founding president of the International Center for Transitional Justice and an adjunct faculty member at the Law School since 1999, struggled for years against apartheid in his native South Africa, serving as vice chairman of the South African Truth and Reconciliation Commission. He put the matter simply: “It is always the same kind of question, ‘What do I owe the world? What kind of contribution can I make?’ ”

Tough questions, as illustrated in a spirited panel led during the day by Steven Kelban, the former executive director of the Root program, that analyzed and celebrated changes brought about by Roots in the judiciary, government, law firms, and public interest organizations. Kelban, who started the Law School’s Public Interest Law Center, and is now the executive director of the Andrus Family Fund, which bankrolls community projects, said he was inspired by his time with Root alumni. “These graduates continue to make a real difference in people’s lives,” he said.

During another panel called, “The Challenges Globalization Poses for Public Interest Law,” several speakers maintained that between the war on terrorism and the war in Iraq, it’s a difficult time to be an American working on international human-rights efforts. For many decades, the U.S. led the world both in official action and in private work. But the panelists argued that the U.S.’s unilateral approach to Iraq, the recent handling of detainees in Guantánamo Bay, Cuba, and an administration that puts a lower priority on international human rights have left its reputation tarnished. “The effect of and reaction to terrorism increasingly affects our credibility,” noted moderator Thomas Buergenthal (’60), the American judge on the 15-member International Court of Justice. “It will set the whole U.S. human rights movement back.”

Boraine made a similar point when asked whether the leaders of the anti-apartheid movement would turn to the United States for help in the same way they once did, if the struggle were arising now. He lamented that it would not be so clear that the United States would be the place to turn. “The United States must get back its focus,” he said. “It is an incredible country, with so much potential and power, but it’s actually ruining its own reputation. America must remind itself of its values.” When asked about what lessons he could offer the United States about Iraq, Boraine listed a number of distinct areas that America must address to achieve reconciliation and restoration. The United States “must consult,” he said, “not just control.” He also stressed the importance of having a legal code that protects ordinary people and of creating and preserving a free, independent justice system.

Such sobering and thought-provoking reflections certainly made clear that although the Root-Tilden-Kern program has accomplished much to be proud of, the need for lawyers who are creative and thoughtful problem-solvers is going to be even stronger during the program’s next half-century.