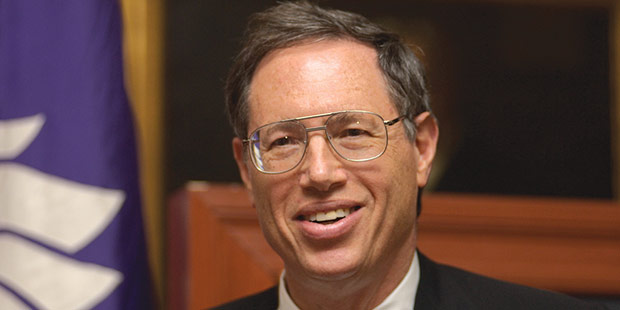 Friedrich A. von Hayek, the Austrianborn Nobel Prize-winning economic liberal, was a proponent of voluntary exchange within a free market system, and staunchly opposed socialism and central planning as the means toward economic development.

The NYU Journal of Law & Liberty, a student publication “devoted to the development and analysis of classical liberal thought,” held its first Friedrich A. von Hayek Lecture in Law last September, featuring the energetic and engaging Professor Richard Epstein as its inaugural speaker.

Epstein, who is the James Parker Hall Distinguished Service Professor of Law at the University of Chicago Law School, kicked off his brief in-residence stay at NYU with his lecture “Intuition, Custom and Protocol: What Are the Sound Sources of Human Knowledge?” During his talk, he examined how Hayek might have understood human nature, our traditions and the choices we make, and then applied Hayek’s theory of spontaneous order—defined as unplanned cooperation among members of a society—to legal frameworks.

Intuition, as Epstein defined it, relies on a set of three basic societal norms: condemnation of acts of aggression, reciprocity in social transactions and revulsion of acts of deviance. These norms suppress violent crime, set the terms for contracts and prohibit taboo acts. Unlike Hayek, who believed that an individual’s moral compass guides a society toward order, Epstein asserts that people will inevitably find exceptions and ways to circumvent these norms (killing in self-defense, for example) and so the creation of laws to sort things out is always necessary.

To define custom, Epstein cited the development of language. No centralized government agency forms a language; rather, it is a collective product agreed upon and utilized by individuals gradually over time. However, in order to resolve extremely critical issues facing a society (the depletion of natural resources, unfair compensation for land), custom may need to be forsaken, allowing a forced evolution to take place in the form of legislation—something somewhat contradictory to Hayek’s laissezfaire philosophy of spontaneous order.

Epstein compared his final topic, protocol (which he defined as “a rigorous program that you follow, come hell or high water”), to intuition by highlighting how, in modern day cases of risk assessment and liability, stringent steps need to be taken and regulations must be observed in order to keep society safe. Epstein explored Hayek’s theory’s restrictions by suggesting that protocol based on data, and instituted by one central organization, will serve society better than multiple individuals deciding things for themselves.

Boiling down Hayek’s model to an image, Epstein remarked that Hayek’s legal system would “have sharp boundary lines, and then once those boundary lines are clear, let individuals figure out what to do.” He recounted that Hayek argued a dispute with the Federal Communications Commission (FCC) in 1944, during which New Deal Supreme Court Justice Felix Frankfurter countered Hayek and said that the government should draw those boundary lines, and, as with a highway, also control the traffic’s flow. “Hayek said that the reason why highways work is that we set the rules and you figure out where to go,” Epstein said, adding, “We have had an empirical test: Highways do just fine—the FCC doesn’t do so good!”