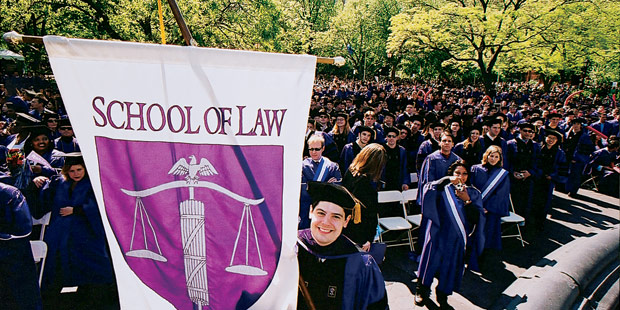 Washington Square Park was awash in purple. Among blossoming trees and bright flags, 5000 New York University students in violet robes entered the park for the University Commencement. Robert Rees carried the banner for NYU School of Law and led his excited classmates to their seats.

“We’ve come from the world over, conquered circumstances, and overcome obstacles as varied as this dear city,” student speaker William Creeley proclaimed. Creeley graduated from the Gallatin School and will attend NYU School of Law in 2003-04. “Change the world,” he told the J.D. candidates, “but wait for me.”

NYU President John Sexton then presented honorary degrees to five outstanding New Yorkers, including Mayor Michael Bloomberg, who received an honorary doctor of laws degree. Bloomberg explained that his mother had graduated from the University in 1929, and his daughter was a freshman at the Gallatin School. “I went to school elsewhere,” he laughed, “but they do say smarts skip a generation. As mayor, I appreciate how much we depend on this university. No stone gates separate the school from the city. New York City is NYU’s campus.”

Sexton echoed the sentiment. “I hope you regard this day not as a moment of departure, but as a redefinition of your relationship with the school.”

The 2003 Commencement Choir sang “New York State of Mind,” and a student from each school accepted a degree on behalf of his or her class. Dean Richard Revesz of NYU School of Law presented a doctoral degree to Fengchun Jin, LL.M., and Theano Evangelis accepted the juris doctor degree and waved to her cheering classmates.

The next day, three candidates for doctorates of juridical science, 534 candidates for master’s of laws, and 443 candidates for juris doctorates celebrated Convocation at the Law School’s ceremony at the Theater at Madison Square Garden. Revesz opened the ceremony with remarks on the present and future successes of the 2003 class. “You have achieved so much already,” he commented, listing several accomplishments, including an amicus brief to the U.S. Supreme Court, cited by Justice David Souter; supervision of a legal needs and resources project; and assistance in drafting East Timor’s Constitution. The dean called for the students to continue to be “a part of the solution,” as the world encounters disruptions and scandal.

Sexton, former dean of the Law School, praised Revesz’s work with the Law School and congratulated him on a great first year. Sexton described his newfound appreciation for the University as a whole, and called on students to be the leaders of this century.

Patrizia Papaianni (pictured in the center), representative of the LL.M. class, praised the ability of the students to bring diverse backgrounds to a common experience. She encouraged the students to strive for the goal “to work in law for a better world.”

Travis Tu (at far right), speaking for the 2003 J.D. class, praised the graduates’ abilities to make achievements in public service: “Rare is a student body more prepared to heed that call than this one.”

Described as “brilliant, dedicated, and selfless,” Professor Randy Hertz, director of the Law School’s clinical and advocacy programs, was recognized for being awarded a University Distinguished Teaching Award for his work with the Law School clinical program. Hertz congratulated students on the bright futures that lie ahead of them. “I look forward to hearing about the mountains you will move in the years to come,” he said.

Larry Thompson (above left), then deputy attorney general of the United States, gave the Convocation address. Thompson, whose son, Larry Thompson Jr., was graduating, praised both the students for having reason to be proud of their accomplishments and the families whose efforts were part of those successes. He encouraged the students to seek opportunities to reach beyond and take risks. He reminded the students that the law is a profession and that a lawyer must always remember who the client is and always give his or her “independent professional judgment.” Thompson said that every lawyer will encounter invitations to abandon his or her principles, but encouraged the students to hold true to those principles and their professional judgments, and, finally, wished them good luck.

Candidates for doctorates of juridical science were hooded first, followed by the candidates for master’s of law and candidates for juris doctorates. Revesz continued the tradition of inviting family members and loved ones who are alumni of the Law School to hood their graduates, and for the first time, started a new tradition of inviting alumni scholarship donors to hood their recipients. Revesz concluded the convocation with warm congratulations to the students.