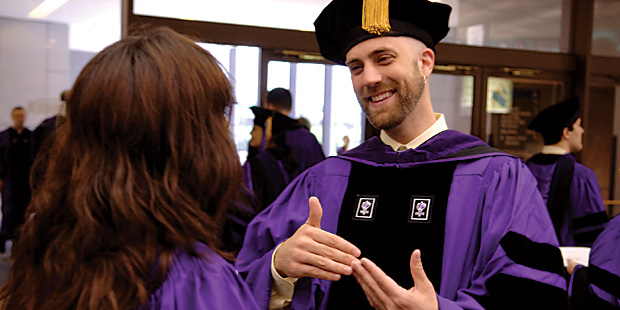 In Paris, where he was living and working as a jazz and funk drummer, Thomas Leith found himself absorbed by old Supreme Court decisions, such as one reaffirming the constitutional status of the Miranda ruling, when a friend said, “You realize that normal people don’t read entire Supreme Court transcripts?”

That comment led Leith, who at the age of 31 was planning a career change, to apply to law school. But what confirmed for him that law was the right choice was his experience in the Federal Defender’s Clinic.

With three other clinic students, Leith represented an ambulance driver accused of disorderly conduct. “Students are only allowed to do petty offenses,” says Leith of the case. “But it’s not petty to the defendant.”

Weeks of preparation, including reviewing testimony and dissecting a surveillance video, led to Leith presenting evidence and crossexamining witnesses during a seven-hour trial, at which Leith’s client was acquitted.

“After you get to know your client and his story, you get really invested for the sake of the defendant,” says Leith. “We were scared to death of letting him down.”

Leith observes that performing in a band onstage has many similarities to arguing in a courtroom before a judge and jury. His next gig? Working as an associate in the litigation department of Sidley Austin.