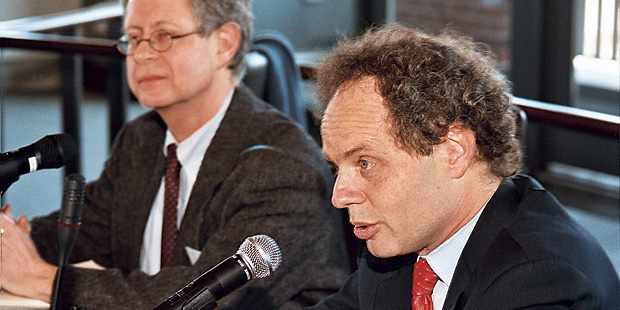 What is the purpose of charters and bills of rights? Can there be democratic jurisprudence? Is there a unity of virtue as the Greeks espoused? These questions were at the center of the ninth annual Analytic Legal Philosophy Conference, hosted this year by the New York University School of Law. More than 50 scholars were invited to the two-day conference, which has rotated among such institutions as the Columbia University School of Law, Yale Law School, the University of Pennsylvania Law School, and Oxford University.

Presenters from abroad included Dr. Grant Lamond of Balliol College at Oxford University, who evaluated how precedent cases influence decision-making by courts, and Professor Wil Waluchow of Canada’s McMaster University, who argued that charters (or bills) of rights should grow and change along with the times and circumstances.

American participants also tackled some tough topics. Professor Jeremy Waldron of Columbia delved into the “discomfort” between jurisprudence and democracy. Professor Michael Moore of the University of Illinois College of Law explored the nature of causal relationships, positing that they are events rather than facts, and that omissions, or failures to act, cannot be causes. Reaching back to ancient times, Professor Susan Wolf of the University of North Carolina tackled the Greek idea of the unity of virtue. Wolf argued that the meaning of “virtue as one,” typically thought of as the idea that one cannot have a virtue without having all others, has been misunderstood. She proposed instead that virtue is unified based on knowledge. Possessing one virtue, Wolf said, requires the knowledge that is needed for possession of all the virtues, and in that way, the virtues are unified.

All in all it was a stimulating conference, with spirited exchanges between participants. Though each presentation may have generated more questions than it answered, the attendees left happy. After all, now they had even more to ponder.