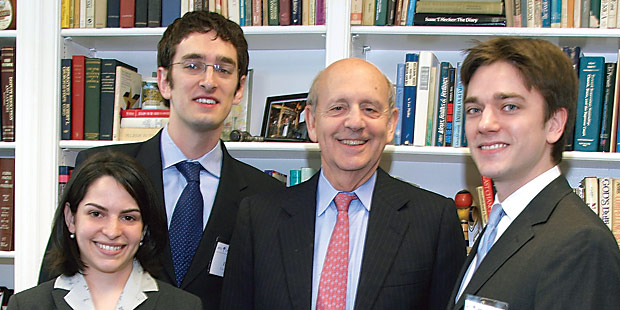 A Justice for All

The editors of the Annual Survey of American Law dedicate their 64th volume to Supreme Court Justice Stephen Breyer.

When he was a first-year student, Annual Survey editor Eric Feder ’07 read Breyer’s dissent in U.S. v. Morrison— that Congress, not the judiciary, determines the balance between state and federal laws in relation to the Commerce Clause—and was struck by the idea that the law must reflect reality and that courts need to adjudicate in step with that reality. “I remember scrawling in all caps, in the margin next to that passage, ‘THANK YOU!’” Feder said.

Breyer’s practical perspective on democracy—that government is connected to the citizens it serves, and that people have a responsibility to work together to affect their communities—was repeatedly invoked by the five legal luminaries who spoke in tribute as the 2007 Annual Survey was dedicated to him.

Echoing Feder’s enthusiasm for Breyer’s writing, Judge Robert Katzmann of the U.S. Court of Appeals for the Second Circuit noted how Breyer’s opinions, plainspoken and free from footnotes, are tools of democracy, enabling anyone to read and understand his judicial decisions.

But aside from Breyer’s contribution to the law from the highest court, several speakers focused on his earlier work. “You may think that the greatest job that Justice Breyer ever assumed…was as associate justice of the Supreme Court,” said Kenneth Feinberg ’70, former special master of the federal September 11th Victim Compensation Fund. “You are incorrect.” He argued that Breyer’s talent for getting political opponents to compromise when he served as special counsel to the Senate Judiciary Committee in 1974–75 was his finest contribution to the democratic process. A prime example was how Senators Edward Kennedy and Strom Thurmond compromised on judicial appointments. “‘You can have Mississippi if we can have Massachusetts.’ ‘You can have a district judge in California if we can have one in Alabama.’ It worked,” said Feinberg, whose own credentials as a mediator are superlative. “Today, when you meet senators who were around back then… they say, ‘Remember those days when the Senate was more bipartisan?’” Kate Adams, Breyer’s former clerk from the U.S. Court of Appeals for the First Circuit who is now vice president and special counsel of Honeywell Specialty Materials, later added, “Perhaps through his constitutional pragmatism, judging each case one at a time through the lens of active liberty, Justice Breyer can do the same for our Court and our Constitution.”

Kathleen Sullivan, former dean of Stanford Law School, who knows Breyer from their days as Harvard Law professors, and Richard Stewart, John Edward Sexton Professor of Law, who worked with Breyer on the casebook Administrative Law and Regulatory Policy: Problems, Text and Cases, remarked that Breyer’s contributions in the public service have been successful because he nails down what really matters. Sullivan described how Breyer approached his work with the judiciary committee with the goal of determining “what they should do that day for the country.” And Stewart recalled Breyer’s 14 years in the First Circuit where he most notably influenced sentencing guidelines, an issue that remains among the most important to the judicial system today. “[Breyer’s] initiatives have not won universal applause,” Stewart remarked, “but these innovations, warts and all, have stood the test of time.”

The same thoughtfulness Breyer demonstrates when serving the people in a legal capacity permeates his nonlegal endeavors. As chief judge of the First Circuit, he recognized that lawyers were constantly getting stuck in malfunctioning elevators in the old Boston courthouse, causing them to miss appearances. Breyer became actively involved in redesigning the new John Joseph Moakley Courthouse, which opened in 1999, from poring over blueprints to getting cost estimates from bricklayers. “He rolled up his sleeves to renovate that courthouse,” recalled Adams. And the building on the Charles River even reflects Breyer’s practical outlook. Ever mindful of the people, Sullivan said, “He built such a courthouse with great success, with great public spaces where the people would have the best views of Boston Harbor.”