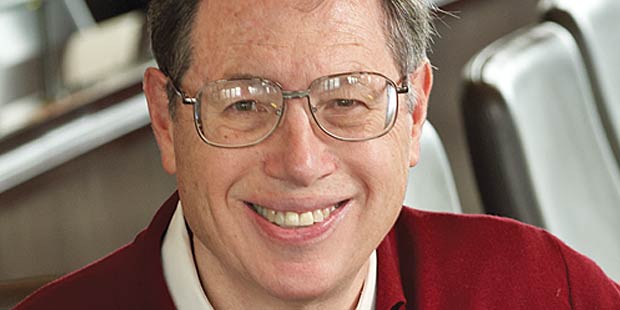 Summarizing his life’s work, the famous libertarian examines how he has mellowed.

To place Laurence A. Tisch Professor of Law Richard Epstein on the political spectrum, just consider the titles of some of the columns he has written over the past year for the Defining Ideas journal of the Hoover Institution, where he is a senior fellow: “The Obamacare Train Wreck,” “Government Overreach Threatens Lives,” and “The Many Problems with ‘Equal Pay.’”

A champion of private property and foe of much government intervention in business and personal affairs, Epstein has for decades been renowned as one of the nation’s leading intellectual exponents of libertarian conservatism. But in recent remarks about The Classical Liberal Constitution, his newly published book that he calls “a lifetime summation,” Epstein discussed a process of ideological “retooling” that he has undergone. “I emerged,” he said, “from somebody who was libertarian through and through to somebody who managed to think that there were systematic weaknesses associated with that position which required serious discourse and switching the title ‘libertarian’ to ‘classical liberal.’”

Rooted in the ideas of Locke, Hume, Madison, and other Enlightenment thinkers, classical liberalism, Epstein explains in the book, guided the drafting of the Constitution and held sway in US Supreme Court jurisprudence through the first third of the 20th century. It was dismantled by the Court’s deference to the economic and social regulation of the New Deal, and since then a broad swath of the political spectrum, not just Democrats, has acceded to the “progressive” (or “social democratic”) view of individual rights and the role of government. “My full-throated defense of classical liberal positions leads me to conclusions on many issues that are at sharp variance with those of both modern liberals and conservatives,” he writes.

Epstein’s differences with modern liberals will surprise no one. But his evolution away from more doctrinaire libertarianism had gone less noticed until now. “This is not the book that Richard would have written 25 years ago,” says Samuel Issacharoff, Bonnie and Richard Reiss Professor of Constitutional Law. Professor Christopher Sprigman, who first got to know Epstein in the early 1990s when he was a student and Epstein a professor at the University of Chicago Law School, agrees: “Richard’s understanding now of how history and path dependency complicate principled constitutionalism is far more supple compared with the understanding he had a quarter-century ago.”

No one expects Epstein to slap a “Hillary 2016” bumper sticker on his car anytime soon, but areas in which his views have moderated include:

Antitrust: Formerly a hardcore free-market proponent, Epstein says he has mellowed and now appreciates that “the cartelization of commerce is a serious threat that no one can ignore.”

Affirmative action: Issacharoff and Sprigman credit Epstein’s pragmatism on this issue in part to Epstein’s experience as interim dean at the University of Chicago Law School in 2001. As the Supreme Court has considered cases involving racial-preference programs at universities during the past few years, Epstein has called on the justices to be hands-off. “Universities and colleges struggle to make considered trade-offs between diversity and academic merit…to produce the best institution they can,” he wrote in a column for Defining Ideas, adding that the Court should give deference to the good-faith decisions that schools make about their programs.

Same-sex marriage: Epstein calls gay marriage a “libertarian’s dilemma,” and was torn on the proper course of action for the justices. In Defining Ideas, he acknowledged being swayed by the “huge sea change in popular sentiment” on the issue and wrote, “Gay marriage is a case where the legal norms would do well to get in line with social practices.”

Epstein’s path from libertarian to classical liberal is not merely an exercise in rebranding. It reflects a willingness to adjust his positions in response to arguments made by others, as well as to on-the-ground facts as law plays out in the real world—a mindset that is dynamic, not doctrinaire. “I wouldn’t say that Richard has changed his mind about essential tenets of his thought, but he has rethought the way his principles actually work out in the formulation of law and policy,” says Sprigman. “The fully realized power of Richard’s thinking grows from his understanding of how principle doesn’t just yield to pragmatism but can include it.”

A Related Endeavor: As Epstein was preparing to publish The Classical Liberal Constitution, he and Mario Rizzo, an associate professor of economics at NYU, launched the Classical Liberal Institute (CLI) at NYU School of Law. CLI’s mission, as it notes on its website (classicalliberalinstitute.org) is to examine “the central question of classical political theory: How does a theory of human nature inform us about (1) the social and legal norms that should govern ordinary interactions between private individuals and (2) the formation and maintenance of the system of limited government needed to protect individual rights?”