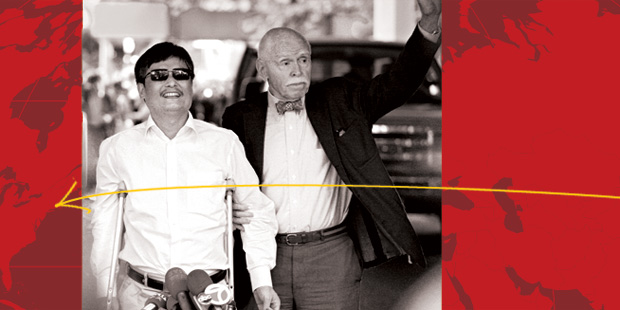 Our Man Behind the Journey from China

When Chen Guangcheng landed at Newark-Liberty International Airport in New Jersey after his dramatic exit from Beijing, he took a short drive to Greenwich Village. A throng of television crews and curious locals gathered outside the residential tower that would now be home to the blind activist and his family, and they erupted in cheers as Chen emerged from a car. Thanking his supporters in a public speech that would have been unthinkable just a month earlier, Chen stood side by side with one of the men who made his departure from China possible: NYU Professor of Law Jerome Cohen.

Three weeks earlier, Harold Koh, legal adviser to the State Department, called Cohen out of the blue on a Monday morning. Cohen, one of the foremost scholars in the U.S. of Chinese law, had been following the news about his friend Chen—the daring nighttime escape from detention in Chen’s home in Shandong, the secret journey to Beijing, and Chen’s taking refuge at the U.S. Embassy—but had no clue that he himself was about to be entangled in the diplomatic standoff between the U.S. and China. Koh and Kurt Campbell, assistant secretary of state for East Asian and Pacific Affairs, asked if Cohen could advise Chen.

The U.S. negotiators had already hammered out a deal with Chinese officials: Chen could spend two years studying in China, followed by a third year in the U.S. But Chen wasn’t convinced. If he took the deal, he would be risking his safety and freedom. He asked to speak to Cohen, his old friend in New York.

The two men had met for the first time in 2003 in the U.S., when the self-taught legal advocate, who fought on behalf of the disabled and victims of forced abortions and sterilizations, was a guest of the U.S. State Department. Chen so impressed Cohen that their 30-minute appointment grew into a four-hour conversation. At that initial meeting, says Cohen, “I could see that he could become a Gandhi figure for China as an authentic child of the rural Chinese masses.”

Koh and Campbell put Chen on the phone with Cohen that day. “I was feeling anxious because I knew the U.S. government wanted him to take this choice,” says Cohen. “On the other hand, it’s a heavy responsibility to tell someone to take a risk while I sit here safely in New York.”

In a long conversation, Chen repeatedly told Cohen that he felt “feichang buanchuan”—very unsafe. Upon hearing this, Cohen advised Chen to stay in the embassy. But the next day, Chen seemed more confident, and Cohen discussed with him various options for staying in China, including convincing President Obama to guarantee his interest in Chen’s welfare. By Wednesday, Chen had accepted the deal and left the U.S. Embassy, only to change his mind within hours: He wanted to go to the U.S.

With a full-blown diplomatic tempest marring long-planned trade and strategy talks, both nations looked for a way out. Just one part of the deal still seemed viable: Could Chen go immediately to the U.S. to
study? Cohen said the U.S.-Asia Law Institute, which he co-directs, would be thrilled to host the activist.

By Friday, Chinese officials had stated that Chen, like any other Chinese citizen, was free to apply to study abroad. Though details would be hammered out over the next two weeks, the crisis was over.

For Cohen, this episode showed just how much U.S.-China relations had evolved. In 1992, Cohen was among those who tried to intervene on behalf of human rights activist Wei Jingsheng, but China did not permit Wei to leave the country for five years. In Chen’s case, it took just five days. “Human rights continues to be an area of disagreement,” says Cohen, “but under pressure China can be practical, even if it means a certain loss of face—and the U.S. put a lot of pressure on China in public.”

Still in daily contact, Cohen remains an adviser to Chen. So what tips has he given his most famous advisee for navigating law school? “To learn, to take advantage of the fabulous reception NYU has given him,” says the professor. “To try to conduct himself in a way to leave open the possibility of return to China.”