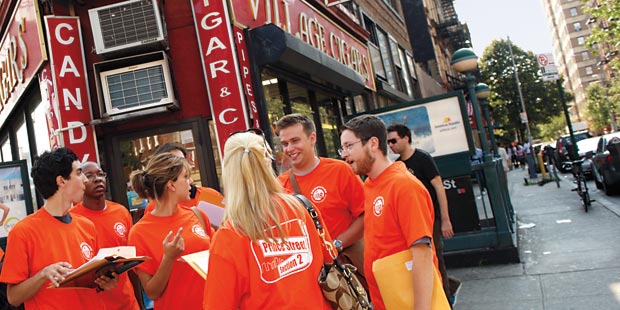 Faculty, alumni, and 2Ls introduce the Law School, the Village, and the city to the incoming class of 2011.

As Roderick Hills, William T. Comfort III Professor of Law, revved up for a mock class analyzing the 2005 case Kelo v. City of New London, incoming law student Giulia Previti ’11 quietly confessed she was excited but apprehensive about the coming year. “You don’t know how the classes will work and what to expect,” she said.

It was Day Three of orientation for the Class of 2011. Roaming the stage of Vanderbilt Hall, Hills was energetically demonstrating the Socratic method of teaching as he and six 2Ls dissected the definition of “eminent domain” and how it could be applied. “If people don’t ask questions, I will call on them,” he warned. Then, turning to one student, he rapped out, “What’s wrong with this argument, Ms. Goldman? You have 30 seconds.”

If the prospect of undergoing Professor Hills’s catechism at first seemed terrifying to Previti and her 447 fellow first-year students, most said his obvious goodwill and sense of humor left them reassured. “He showed that you need to be prepared but he will help you along,” said Josh Levy ’11. Vice Dean Barry Friedman couldn’t be more pleased with this answer. The architect of J.D. orientation, he deliberately ditched the traditional combination of speeches and social events for a more dynamic, heuristic model. “We decided to focus on a very substantive orientation that acquaints students with what is going to happen when they hit the classroom,” said Friedman.

This year’s orientation was built around Kelo, chosen because the case touches on many first-year curriculum teaching points and is recent enough that students may remember its newspaper headlines. (The case involves a lawsuit by Susette Kelo, whose New London, Connecticut, home was condemned to be razed for an office park under the right of eminent domain.) “We take the case almost from cradle to grave to illustrate some of the stages that law students would experience,” explained Friedman. “We tried to give them a chance to see it from a lot of different perspectives, to be consistent with NYU’s advantages and uniqueness.”

The previous day of orientation had introduced students to Kelo through a moot court. Dennis Jacobs ’73, chief judge of the U.S. Court of Appeals for the Second Circuit, and Barbara S. Jones and Victor Marrero, both U.S. District Court judges for the Southern District of New York, heard the arguments. Richard Epstein, James Parker Hall Distinguished Service Professor of Law at the University of Chicago, who in 2010 will join the faculty of NYU Law, presented an impassioned plea for the petitioner, calling New London’s development plan “a giant intellectual and planning fiasco.” Jane Gordon, New York City’s senior counsel in the Office of the Corporation Counsel, vigorously argued that economic development is a public purpose and therefore the Fifth Amendment clause on public use—“ nor shall private property be taken for public use without just compensation”—applied.

An actual verdict wasn’t rendered, since the three judges may hear eminent domain cases in the course of their real-life judicial duties, but they did share their general thoughts. Jacobs discussed the difficulties of deciding cases based on conflicting values, as well as the importance of sidestepping compelling but essentially extraneous material in order to focus on the key elements. Jones explained the differences between higher and lower courts, noting, for instance, that higher courts look at the broad principles of a case while lower courts concentrate on scrutinizing the minute facts.

The students had already had some hands-on experience in scrutinizing minute facts on the first day of orientation. The occasion was a scavenger hunt designed to introduce them to Greenwich Village, the Law School’s history, and their classmates, part of the orientation’s goal of building esprit de corps. “The great thing about orientation is meeting people,” said Previti. “Having a sense of community helps a lot in decreasing your apprehension.”

There were plenty of people to meet. After moot court, students mingled with the judges, professors, and law school alumni in the elegant setting of Gotham Hall. Inviting alumni to participate in orientation was new this year but is something Friedman intends to repeat. “ They’re an outstanding resource that we can and should call on more,” he said.

The orientation also showcased the depth and breadth of the Law School’s faculty. Professor Hills’s mock class was followed by a postmortem panel discussion with Law School faculty that demonstrated “how the law operates in many different dimensions,” said Friedman. Professor Daniel Hulsebosch took a historical view of eminent domain clauses. Vicki Been ’83, Boxer Family Professor of Law, who teaches classes on property law and is director of the Furman Center for Real Estate and Urban Policy, talked about how public policies affect private neighborhoods and communities in very real and profound ways. Burt Neuborne, Inez Milholland Professor of Civil Liberties and an active litigator, examined Kelo from a practitioner’s perspective. “Something that often gets lost in the intellectual feast that is law school is our social role,” he noted. “We’re supposed to be advisers and tell our clients what they should do to bring their affairs into legal concordance.”

As everyone drifted off to pick up their box lunches and picnic with their section’s faculty, the mood among the first-year students was considerably more relaxed than it had been the day before. So far, students noted, NYU was living up to its reputation for being collegial and collaborative. “The professors don’t have that Paper Chase attitude of drilling you into submission,” said Eric McLaughlin ’11. “People seem more cooperative and less cutthroat than other places. There’s a sense that everyone wants to work hard but isn’t obsessed.”

If there’s one lesson Friedman wanted students to take away from orientation, it’s precisely that: “There are tough schools and friendly schools. We’re both really tough and really friendly.” Orientation, he added, should help students to start law school at NYU “comfortable in the classroom, familiar with people around them, and happy to be in New York City.”

All of 2009 Student Spotlight