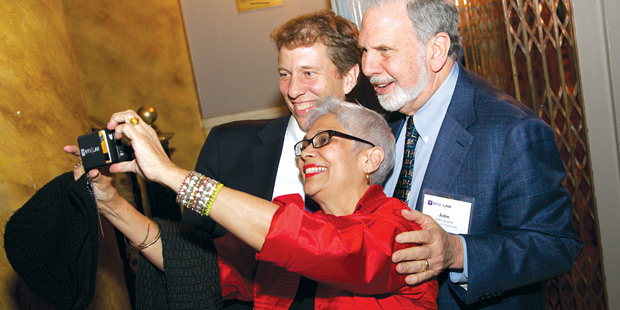 Whether at Admitted Students Days, Orientation, or Feast for Finals, where she would break out in dance while serving scrambled eggs to stressed-out students, it was hard to miss the feisty woman with short white hair and fashionable glasses. But after three decades, Margarite Quiñones retired last January as associate director for academic services.

Quiñones arrived in 1981 and quickly rose from a secretary to assistant director of financial aid. Though in that job for only three years, she says she learned so much: “Financial information is very personal. I had to find a way of explaining policy while at the same time letting them know I didn’t create it.”

In 1985, Quiñones became administrative director of the Graduate Division, a job she held for 21 years. She attended events hosted by student organizations and, like a proud parent, kept a “wall of fame” in her office that included Judge Jenny Rivera ’85 of the New York State Court of Appeals and Sherrilyn Ifill ’87, president and director-counsel of the NAACP Legal Defense and Educational Fund. From 1998 to 2001, one of the students literally was her son; Yumari Martinez ’01 now serves as an assistant commissioner in the NYC Administration for Children’s Services.

Despite her retirement, Quiñones volunteered this spring, as usual, to assist the photographer who captures every student receiving a diploma at Convocation. She plans to continue to attend Law School events. “They think I’m kidding when I say, ‘I’m going to see you at graduation,’” she says with a laugh. “I’m not. I’m going to see everybody at graduation. I’m going to hug ’em and shake their hand.”

Quiñones invites students and alumni to contact her at mvq622@gmail.com.