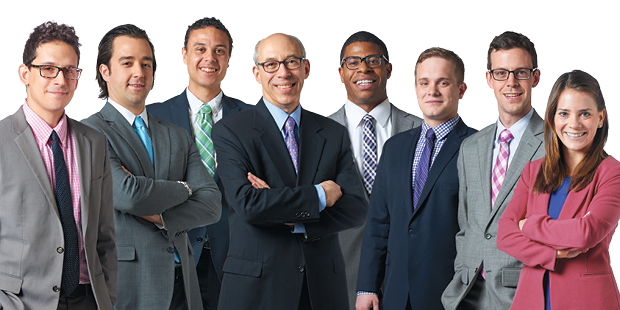 With the future of the Motor City on the table, seven students and their professor reimagine the structure of its municipal government.

Overwhelmed by $18.5 billion in debt, the City of Detroit sent out a rescue flare last July. The resulting municipal bankruptcy—the largest in history—presented lawyers and policymakers with a rare opportunity to fundamentally rewire the complex legal and financial circuitry of a major metropolis. Enter Max E. Greenberg Professor of Contract Law Clayton Gillette and a team of NYU Law students. They devoted a substantial part of the 2013-14 academic year to a project to help secure Detroit’s future: developing governance structures to promote fiscal stability.

With the assistance of Beth Heifetz ’83, a partner in the Washington, DC, office of Jones Day, Gillette approached Kevyn Orr, the emergency manager for Detroit, in the spring of 2013 with a proposal for a project to consider which forms of municipal governance best ensure fiscal stability. The ensuing assignment sought answers to two questions: Given what other distressed cities had done, which short-term governance structures might be appropriate after the emergency period ends? And what long-term structures could ensure fiscal health?

Gillette was the ideal candidate to spearhead the undertaking. Long a leading expert on local government law and financially distressed municipalities, he has authored books on municipal governance and municipal debt finance, and he has written about relations between localities and their neighbors and the privatization of municipal services. In his 2011 book Local Redistribution and Local Democracy: Interest Groups and the Courts, Gillette examined ways in which local governments engage in substantial redistribution to both the wealthy and the poor, through tax incentives for development and “living wage” ordinances, for example. The book also discussed the role of the courts in reviewing local redistributive programs.

Gillette invited seven students to work with him on the extracurricular project: Daniel Barron ’14, Hampton Foushée ’14, Zachary Kolodin ’14, David Leapheart ’14, Joshua Lobert ’15, Andrew Walker ’15, and Amy Wolfe ’15. “This was an incredibly diligent and creative group,” Gillette says. “The time they spent on this project was the equivalent of an additional course in their schedule. They had to learn areas of the law to which they had no previous exposure and think outside the box about how to reform municipal institutions that had failed to provide basic local goods and services.”

Meeting once a week or more for about three months, the Detroit team operated as a “mini law firm,” in Gillette’s words, with the Office of the Emergency Manager as its sole client. Supervised by Gillette, students deliberated big questions as a group, divvied up research for specific issues, and collaborated on drafting memos. The focus of their inquiries ranged widely. One evening they would investigate the benefits of a “strong mayor” system, while the next they would discuss the appropriate role of a financial control board. In the process, they considered municipal debt, tax structure, relations with the state, relations with suburban areas, labor, and internal governance structure.

The Detroit project, says Gillette, offered “a once-in-a-lifetime opportunity for law students to be involved in institutional design and to have the experience of seeing how a municipality both works and could work.”

“We were doing a lot more than just law,” says Wolfe. “We were problem solving. Here’s a city. This is the condition it’s in. Now how do we make it better? Professor Gillette was asking open-ended questions that I didn’t have answers to, and it made me rise to the occasion. I was given the opportunity to learn and give my opinion.”

The interdisciplinary nature of the assignment gave students the opportunity to think more broadly than they would have if they were simply reading casebooks and statutes for a class. Members of the group interviewed officials and business leaders from Detroit and other jurisdictions that had confronted financial distress. They then discussed their findings and recommendations. Wolfe recalls at one point making a big chart of all the positions in the city government to try to untangle the powers of appointment and removal.

“It was incredibly refreshing to see the ideas we’d vocalized as students actually make it to the finish line, and it’s encouraging to know you can do anything with this degree,” says Leapheart, who grew up in Michigan with grandfathers who were United Automobile Workers members.

“We think we had substantial input into the conversations that are continuing about post-bankruptcy Detroit,” concludes Gillette. “But regardless of what happens with our proposals, this was a remarkable opportunity and a great learning experience for the students.”

Following the success of the Detroit project, Gillette has created an interdisciplinary seminar, Law and Economics of Municipal Governance, that he will co-teach in Spring 2015 with adjunct professor Robert Inman, an expert in urban fiscal policy at the University of Pennsylvania’s Wharton School.

—Michelle Tsai is the public affairs officer for NYU Law.