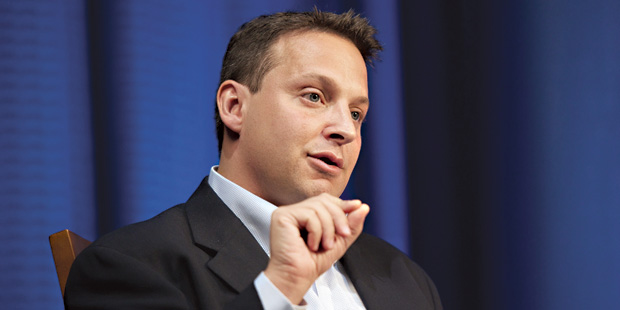 Daring to Be Green

The dream of a technology that produces nonfossil fuel for our industrial world has been an entrepreneurial holy grail since the 1970s. Jonathan Wolfson ’00 was first seduced by that idea as a student in NYU’s joint J.D. and M.B.A. program when he came across research suggesting that algae are capable of producing oil. What if he and his friend Harrison Dillon, a geneticist, could figure out a way to commercialize the process?

“The scope of our ambition was colossal,” says Wolfson now. “We intended to produce the first wide-scale technique to produce oil for fuels.”

Fast-forward 15 years, and Wolfson is the CEO of Solazyme, a company he co-founded with Dillon that produces an algae-based oil that has been used to power a commercial jet and a Navy ship. Here’s how the technology works: They place plant-based sugars into fermentation tanks and introduce algae. The algae then convert the sugar into oil that can be applied diversely as fuel for engines or to make soap, cosmetics, and even food.

Wolfson, who was the guest at a dean’s roundtable last October (see all of the dean’s 2011-12 guests at right), believes the technology is potentially world-changing. Big business seems to be listening, as Wolfson has inked partnerships with Dow Chemical, United Airlines, and the Department of Defense. He and Dillon took the company public in 2011, raising $227 million. And they are hiring at such a pace that Solazyme is effectively a new company every 18 months.

So far, though, their production has been relatively modest, and the open question to Wolfson is whether they can scale up to levels at which they could meaningfully compete in the global oil market. Solazyme’s investors are about to find out. This spring he negotiated a deal with agribusiness giant Bunge to build a factory in Brazil that will produce oil for chemical and fuel products at a volume five times greater than the company has ever attempted. Bunge’s investment represents an unprecedented bet on both Solazyme and the biofuel industry.

So how has Wolfson convinced several of the world’s largest and most conservative companies to place bets on this new and relatively untested technology?

“Jonathan can identify opportunity where others see risk,” says Dillon. “He has an ability to see down the field that you’re frankly not going to get in large, slow-moving corporations.”

Take, for instance, Wolfson’s decision in 2003 to found Solazyme with Dillon. Wolfson was three years out of NYU and working for a software company in New York. Meanwhile, Dillon, his former college roommate at Emory, had only recently earned his doctorate in genetics. The two friends knew from the basic science that algae could produce oil through photosynthesis. So they hatched an untested plan to build bioreactors and ponds where the algae would be exposed to direct sunlight.

They had very little hard evidence to confirm that the model would actually work on a commercial scale. But for Wolfson the idea was enough to compel him to quit his job, buy a $600 car off Craigslist, drive cross-country to California and, in the quasimythical tradition of Steve Jobs and Steve Wozniak, set up shop in Dillon’s Santa Clara garage.

The pair devoted a year to securing funding and building the reactors. Then reality hit. The ponds did not produce enough oil to make the company commercially viable. “It was a real meet-your-maker moment,” remembers Wolfson. Faced with that failure, Wolfson doubled down and went back to his investors—many of whom were family and friends—and asked for more money to try an equally untested method of introducing the plant sugars to algae in the dark.

The experiment worked, but Wolfson took a detour instead of building capital- intensive factories immediately: He focused instead on positioning Solazyme more broadly as a renewable oil company, which would enable it to penetrate several industries on a smaller scale.

Solazyme was openly scoffed at within the burgeoning biofuel industry. “Jonathan and I would speak at these big biofuel conferences, and we were literally ridiculed for talking about having a food business,” Dillon recalls. “We were viewed as taking our eye off the trillion-dollar fuel market.”

But the bet paid off. The partnerships that Wolfson forged with food, cosmetics, and chemical companies made Solazyme profitable while it continued to develop fuels for cars, ships, and planes on a small scale. Environmentalists as well as the fuel industry paid attention last fall when United Airlines used the company’s Solajet fuel to make the first commercial flight using microbially derived biofuel, and the U.S. Navy powered a destroyer up the coast of California with the company’s diesel fuel.

“Failure on some level is your friend,” says Wolfson, pausing for a moment to reflect. “You have to be willing and open to the idea that everything you do isn’t going to succeed.”