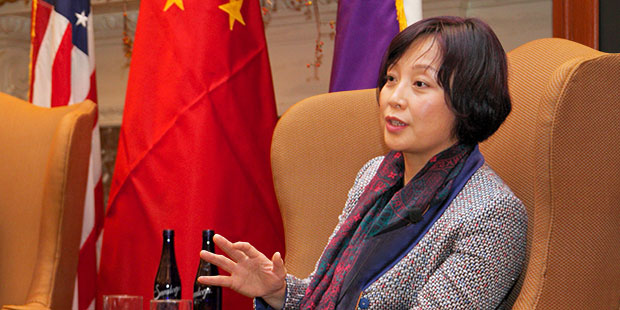 Jin (pictured, above) began her legal career at the China Securities Regulatory Commission, which sent her to NYU Law. She credits the program with opening her mind: “Living with students from all over the world gave me different cultural influences and made me more tolerant to difference.”

After returning to the commission, Jin helped draft the country’s fund law before working her way through a few jobs to the position of deputy CEO at China Asset Management Company. Being second in command, however, soon grew uncomfortable. “I understood more about the employees, discovered their potential, and wanted to promote it. Also, I had a vision of the industry and how I wanted to develop the company,” Jin said. “I tried very hard to convince the CEO about my ideas. Once I got a not-very-positive response, I realized that maybe it was time for me to move on.”

At age 36, she took the helm of Guotai, with $300 million in assets and 300 employees. Guotai employs a nearly 40 percent female workforce, while its competitors’ employees are about two-thirds male, Jin said. Aside from becoming chair of the board, teaching, and continuing her involvement with Guotai’s charity program, Jin said, “For now, I want to make sure I’m a very good CEO and that I satisfy my shareholders, board, and clients.”