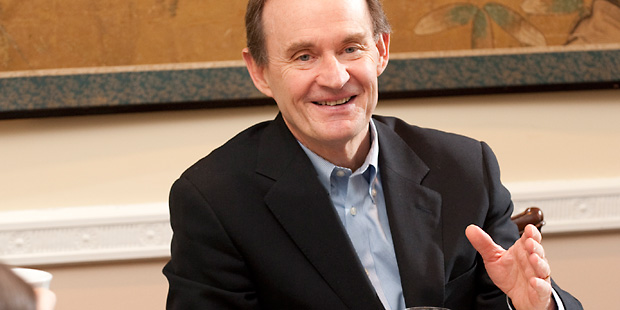 A Top Gun Shoots from the Hip

By anyone’s reckoning, David Boies (LL.M. ’67) has had a highly successful legal career. At Cravath, Swaine & Moore, he successfully defended IBM from antitrust action, persuaded General William Westmoreland to drop his libel suit against CBS, and made partner at 31. Boies left the firm in 1997 to start Boies, Schiller & Flexner, which counts as clients American Express, DuPont, and NASCAR. Nonetheless, he has never forgotten the one that got away: Bush v. Gore.

Boies recalled the infamous Supreme Court case, which he argued on Al Gore’s behalf in 2000, at a roundtable last spring hosted by Dean Richard Revesz. “Every lawyer is used to losing cases, but it’s tough when you lose the whole country,” Boies said, calling the defeat “particularly frustrating and disappointing” because the Florida courts had been receptive to Gore’s arguments. Boies described those tense post-election days for a rapt audience of students. While the Court stipulated that its decision should not be used as precedent, Boies likened the case to a landmine: “People sometimes even forget it’s there, but in the right circumstances it can blow something up.” He predicted we may not have heard the last of Bush v. Gore. “It could come back to haunt some of the ideological conservatives who thought it was a good idea at the time.”

Boies is no stranger to politics. He served as chief counsel and staff director to both the Senate Antitrust Subcommittee and Judiciary Committee in the 1970s, and as counsel to the Federal Deposit Insurance Corporation in the 1990s. In 1997, he won the closely watched United States v. Microsoft antitrust case as the Justice Department’s special trial counsel.

That high-profile case undoubtedly helped to fuel the extraordinary growth of Boies’s three-lawyer boutique into a 240-attorney behemoth. Despite its size, Boies still believes that less is more. “Size is really an enemy,” he said. “But it’s a necessary evil because if you’re not growing, you’re not going to be able to continue to have the very best lawyers, and having the very best lawyers is the way you keep the very best clients.”

Boies, who suffers from dyslexia, does not use notes when arguing in court, but can still cite cases from memory, down to the page number. And despite being a formidable trial lawyer, he confessed that he had his heart set on teaching; he was an adjunct professor at NYU Law for six years. “I enjoy the law,” he said. “There’s almost no aspect of it that I don’t enjoy.”