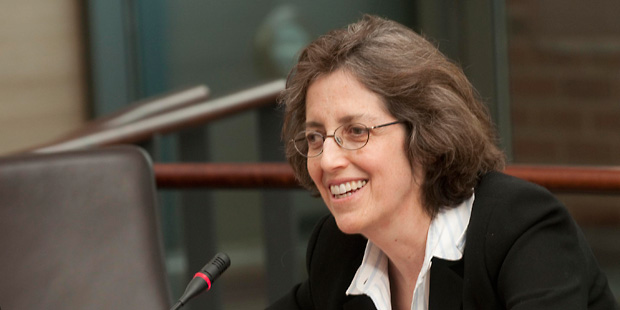 Former students and teachers gather to celebrate a decade of ensuring fair treatment for immigrants.

Professor Nancy Morawetz ’81, founding director of the Immigrant Rights Clinic, confessed “a little embarrassment” at the flood of tributes she received last March when half her 150 former clinic students met to celebrate the IRC’s 10th anniversary and to share lessons learned in advancing social justice for a largely defenseless population. “The dream was there,” said Morawetz, as she reflected on the clinic’s genesis in an interview, “but there was no way back in ’99 that we could have completely envisioned where our work would take us.”

Ten years later, the destination includes the highest court of the land. Morawetz and her small but strongly idealistic army of law students were involved in the bulk of immigration matters before the U.S. Supreme Court over the past decade. Even after graduating, many clinic alumni have stayed in the field. Now as practitioners, they are fanned out across America and points overseas to apply the clinic’s formula of legislative effort, community advocacy, and media outreach in addition to impact litigation.

This year, for instance, students Andrea Gittleman ’09 and Sara Johnson ’09 drafted an amicus curiae brief to the high court on behalf of the Supreme Court Immigration Law Working Group, a coalition of major immigrant rights organizations monitoring the pending matter of Flore-Figueroa v. U.S. In their brief, and in strategy assistance given to plaintiff counsel, Gittleman and Johnson argue that workers who submit to employers falsified documents containing randomly created Social Security numbers should not be subjected to the “aggravated identity theft” penalty that warrants a mandatory two-year jail sentence.

The clinic’s agenda has expanded far beyond NYU Law as some who have co-taught alongside Morawetz have replicated the program at Yale Law School, the City University of New York School of Law, and the University of Texas at Austin School of Law. Recently, IRC alumnus Peter Markowitz ’01 launched an immigrants’ rights clinic at the Benjamin N. Cardozo School of Law.

Isaac Wheeler ’03, today a staff attorney at the Bronx Defenders, spoke for his fellow celebrants in explaining Morawetz’s continuing influence. “Whenever I think, there’s no way, no chance for this case, I hear Nancy’s voice saying, ‘Oh, you can do this!’” said Wheeler. “I am forever warped,” he added. “So thanks, Nancy.”

Rachel Rosenbloom ’02 spoke of doubt on first exposure to Morawetz’s fierce view that young lawyers have a responsibility to accept the growing needs of immigrants, especially in a post-9/11 climate hostile to them. “In class, I would secretly wonder—is she crazy?” said Rosenbloom, a former supervising attorney at the Post-Deportation Human Rights Project at the Center for Human Rights and International Justice at Boston College. “But I’ve learned that being a graduate of Professor Morawetz’s clinic means that in the world of criminal deportation, doors open anywhere in the world.”

Enthusiasm for the clinic is perhaps best demonstrated by Alina Das ’05, an IRC alumna who became Morawetz’s coteacher in 2008. “I remember thinking after my year as a clinic student, wouldn’t it be great to do this forever?” said Das. “So, it’s been great getting a job here.” Mayra Peters-Quintero ’99, now a program director of migrant and immigrant rights at the Ford Foundation and Morawetz’s former co-teacher from 2004 to 2008, graduated the spring before the clinic was begun.

Morawetz spoke of the clinic’s ongoing efforts in navigating what she terms the “horrible process” of alien detainment and deportation hearings in accordance with the Illegal Immigration Reform and Immigrant Responsibility Act.

Luis Gutierrez, blindsided by an especially draconian application of that 1996 federal statute, was represented by clinic students in his long struggle for habeas corpus relief after being deported to his native Colombia—a struggle that included being “ripped off,” as he put it, by an ineffective private attorney. Gutierrez, one of a few former clients invited to the reunion, offered his thanks to the dozens of students who helped him from 2000 to 2007, when he returned to the United States as a free man. “I had lost all hope of justice,” said Gutierrez, now working as an electrician in Jersey City and reunited with his American-born daughter. “But then I found this clinic.”

Morawetz, admitting inability to imagine an eight-year separation from her own two children, said of the Gutierrez case, “He suffered terribly. His marriage was destroyed. You can’t make somebody whole again. All that pain and anguish, yet he’s the happy story.”