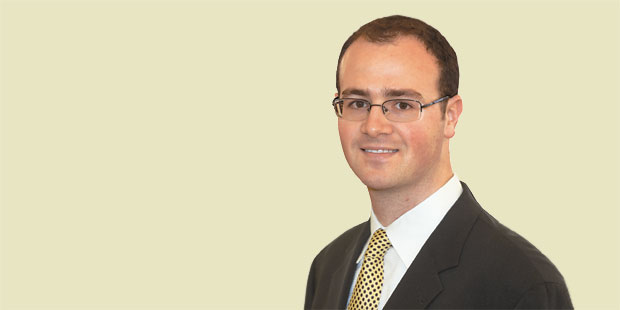 Sticking with the Facts

Assiduous research led one student to challenge the pros—and conventional wisdom—in the settlement of torts.

Jeremy Babener ’10 has made quite a name for himself at the intersection of tax and tort law, having published a journal article, spoken at two national practitioners conferences, and found his work cited at the Treasury—all before receiving his J.D.

As a law clerk in the U.S. Department of Justice Torts Branch during his 1L summer in 2008, Babener quickly impressed the attorneys there with his relentless curiosity and meticulous research. “He never gives a cursory response,” says Gail Johnson, senior trial counsel at the DOJ. “When he hands you the final product, it’s exhaustive.” That summer, Babener first discovered the topic that would direct his academic life for the next two years: structured settlements, in which a defendant agrees to resolve a personal-injury tort claim with periodic payments over time rather than with a lump sum.

While researching structured settlements for his seminar paper in Tax and Social Policy back at school the following fall, Babener kept coming across references to the same piece of conventional wisdom—that personal-injury claimants receiving lump sum settlements dissipated their awards within five years 90 percent of the time. This information was being used to support tax subsidies for structured settlements. Despite a thorough search, Babener found only anecdotal evidence and no empirical confirmation of the notion. “A government incentive as important as the structured settlement tax exclusion deserves to be grounded in statistically valid data,” he says.

This assertion led Babener to an 80-page, single-spaced first draft of his seminar paper, which detailed the history of structured settlements and delved into such fine points as qualified settlement funds that allow the settlement of lawsuits before an agreement is reached on how the amounts will be allocated among the claimants. His professor, Lily Batchelder, suggested he break the draft into two distinct pieces. Babener followed her advice, and both were accepted for publication. The Fall 2009 NYU Journal of Law & Business included his note, “Justifying the Structured Settlement Tax Subsidy: The Use of Lump Sum Settlement Monies,” and the NYU Journal of Legislation & Public Policy published “Structured Settlements and Single-Claimant qualified Settlement Funds: Regulating in Accordance with Structured Settlement History” as an article in Winter 2010.

Babener’s diligent research had led him to contact and share drafts with practitioners and academics, and the interest was returned. First, organizers of the 2009 annual conference of the Society of Settlement Planners in Washington, D.C., invited him to attend. Then he presented his research findings and participated in a panel discussion at the 2009 National Association of Settlement Purchasers annual conference in Las Vegas. Patrick Hindert, co-author of the legal reference book Structured Settlements and Periodic Payment Judgments and editor of the blog Beyond Structured Settlements, posted an extensive two-part article analyzing Babener’s work, then enlisted Babener as a contributing author. At the 2010 Settlement Planners conference Babener gave a presentation and participated in a panel discussion. The feather in his cap: In February 2010, his research was cited in a U.S. Department of the Treasury hearing on the part of the tax code underpinning structured settlements. “Being in contact with those in the industry has allowed me to write from a position of knowledge that would not have otherwise been possible,” Babener says.

A 2010-11 Tax Policy Fellow, Babener is pursuing a master of laws in the Graduate Tax Program. He plans to return to his hometown of Portland, Oregon in 2011, joining top Pacific Northwest firm Lane Powell, where he was a 2009 summer associate. He’ll no doubt hit the ground running. “Jeremy has made a large name for himself in a very short time due to the integrity of his work,” says Batchelder. “He’s a real self-starter and is completely interested in getting things right and improving policy.”