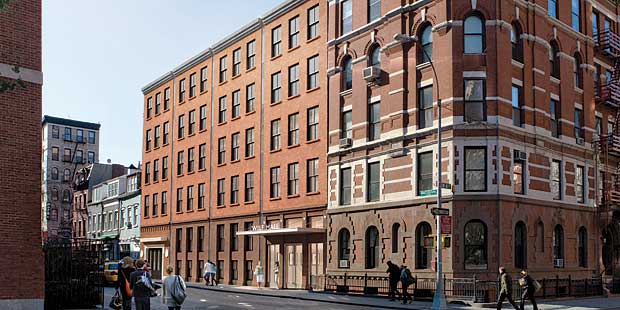 An Illustrated Guide to Wilf Hall

A signature feature of NYU School of Law is its many prominent and active centers and institutes. Their growth in size and number-plus the demands of an innovative and enterprising academic community-compelled NYU Law to expand its physical plant.Wilf Hall, at 139 MacDougal Street, will officially open in October 2010 as a campus destination for faculty, students, and research scholars from an array of disciplines to exchange ideas and, through their work, shape the public discourse around the leading social and political issues of the day.

The Roof is Alive
A green roof and two planted terraces, bedded with grasses, ferns, and trees, will help insulate the building year-round and filter pollutants out of rainwater, thereby reducing runoff into the city’s sewers. Terraces on the second and sixth floors serve as informal meeting areas, with walking paths enclosed by creeping perennials and grasses.

Preservation Hall
Established in the 1920s, the Provincetown Playhouse premiered many of Eugene O’Neill’s plays. Wilf Hall retains all four walls of this historic gem, which will continue as a working theater run by the Steinhardt School of Education to hold classes, readings, and storytelling evenings, and debut new music.

Platinum Standard
Designed and constructed to join an elite few New York City buildings that attain the highest certification of the U.S. Green Building Council’s Leadership in Energy and Environmental Design, Wilf Hall will be evaluated in five categories including water and energy efficiency, indoor environmental quality, and innovative design. Notable features include bicycle storage and showers for commuting riders, and the green roof and terraces.

Patron Vikings
Law School Trustees Leonard Wilf (LL.M. ’77) and Mark Wilf ’87, partners in real estate development firm Garden Homes, generously underwrote the hall. The cousins’ gift is one of several important contributions the Wilf family has made to the Law School, including the Wilf Family Professorship of Property Law, established in 2002. Leonard, Mark, and Mark’s brother Zygi are also co-owners of the Minnesota Vikings.

A Center for Centers
Intended to be a central gathering place for scholars, Wilf Hall will house a dozen centers, programs, and institutes, plus an admissions welcome desk on the main floor, and admissions offices and offices for academic fellows below.

Corner of the Park
This new addition establishes a true campus for the Law School in Greenwich Village, with four academic buildings (shown in orange) in the vicinity of Washington Square Park. Two residence halls (shown in peach) are a short stroll away.