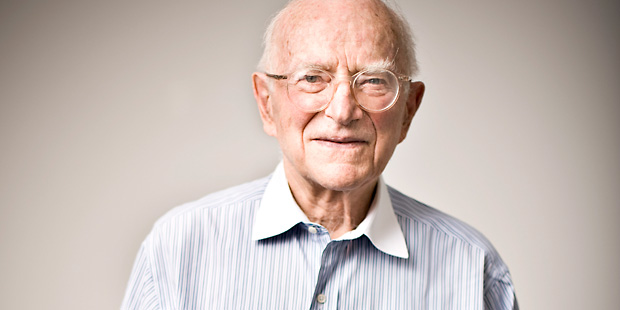 A Life on the Street

Seth Glickenhaus, who worked at Salomon Brothers in 1929, is optimistic about the recession.

The great depression seems a succession of iconic images and moments: Variety’s 1929 headline: “Wall Street Lays an Egg”; Hoovervilles in Central Park; Franklin Delano Roosevelt declaring the nation had nothing to fear but “fear itself.”

But Seth Glickenhaus ’38 has a single, searing memory: When he was a 16-year-old freshman at Harvard College in 1930, Glickenhaus was surprised to arrive home to find his father, Morris, downcast. An insurance broker, his father had just fired a longtime employee. “He’ll get another job, won’t he?” Glickenhaus said. His father, not a man given to emotion, wept.

Now 95, Glickenhaus has been besieged by business reporters seeking the perspective of someone who worked on Wall Street during the Great Depression. They want his insight into the economic crisis and are frankly astonished that someone of his years is still working. Glickenhaus sets aside weekdays at 4:15, after the market closes, just for media interviews.

When Glickenhaus sat down to talk in his midtown Manhattan office on an overcast day last November, the market, after weeks of free fall, was up. He wore a brown sweater, gray pants, and eyeglasses the size of oranges. His thin white hair was swept back on his head. Though he walked slowly, in tiny steps, his voice was strong, his hearing good, and his opinions tart.

When investment bankers today take tens of millions of dollars in fees, “that, to me, is Al Capone with a high hat,” said Glickenhaus, senior partner and chief investment officer of Glickenhaus & Co. Just as bad in its way is the business press, he said. “The media has so emphasized the negative, that the market has made a low that will stand for some time even though we are in for only a year or two of recession.” The country has deeper problems than it had during the Depression, he acknowledged. But unlike that time, when government failed to act quickly, Glickenhaus said, “governments—both ours and in Europe and in Asia—are throwing so many trillions at the problem that the recession will not be very deep or very long.”

He singles out one Wall Street player for criticism: the credit-rating agencies, like Moody’s Investors Service and Standard & Poor’s. Analysts say their sunny ratings of mortgage securities helped lead to billions of dollars in losses. But Glickenhaus thinks the agencies will never get it right. They “look at the past and the present, without making a real effort to look into the future because that’s more subjective.” He frowned. “So the day after a triple-A bond defaults, they downgrade it!” he said, laughing.

Glickenhaus’s skepticism toward Wall Street began in the summer of 1929 when he worked as a teenage errands “runner” for Salomon Brothers & Hutzler (now Salomon Brothers, part of Citigroup). He was chided by his boss for doing his job too quickly as longer tasks paid better. “The word was ‘stall,’” he said. “You were supposed to take twice as long. You could get a cup of coffee, you could get your shoes shined. I was appalled.”

Nonetheless, after Harvard, where he concentrated in economics because of the stock market crash, he got a job as a bond trader at Salomon in 1934. In the days before computers, bonds were an arcane market. “If you had a good memory” for bond yields and financial minutiae, he said, “you could make a good living.”

But he wasn’t making a good living: He earned only $48 a week, a small sum even then. He had decided to hedge his career bets by going to the NYU School of Law at night, graduating in 1938. That year, however, he and a friend, Lawrence Lembo, founded their own small securities firm, Glickenhaus & Lembo. And he never looked back. He worked at the firm until World War II intervened. “As an American and a Jew, I felt I owed it to myself to shoot Nazis.”

Alas, it was not to be. Despite being assigned to what became the legendary 10th Mountain Division, the Army’s white-clad ski soldiers, he spent much of the war training other troops and learning a foreign language. Still, he gained a wife, having met a pretty speech therapist, Sarah Brody, while studying Norwegian at the University of Minnesota.

He returned to Wall Street and struck it rich after a lucrative bond deal in 1959. He and Lembo retired. He was in his 40s, however. So, in a midlife crisis, Glickenhaus decided on his version of a cherry-red Corvette: He wanted to become a doctor. After brushing up on sciences at Columbia, he was admitted to Albert Einstein College of Medicine, but reconsidered matriculating when he realized the toll years more of training would take on his marriage and his then-teenage children, Jimmy and Nancy.

He snorts at the inevitable question of the secret to long life: “The right genes and a wife who makes sure you live sensibly.” He exercises regularly, sleeps nine or more hours a night, and eats a Mediterranean diet.

Any parting advice? Don’t follow icons, he said. “If Warren Buffet is doing something, people want to do it,” he said. “Think for yourself, or else the world will really foul you up!”