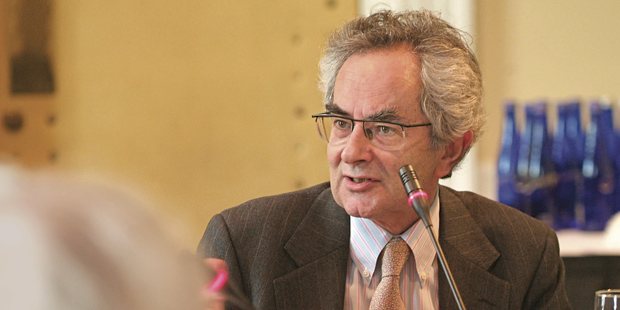 At 128 pages, University Professor Thomas Nagel’s book Mind and Cosmos may look modest, but it ignited something of a furor in the fields of science and philosophy upon its publication last October. The book’s subtitle helps to explain the reaction: “Why the Materialist Neo-Darwinian Conception of Nature Is Almost Certainly False.” Nagel posits that the existence of human consciousness is a fundamental aspect of the universe that cannot be explained by evolutionary theory alone, and argues that a “natural teleology” might lead t he universe to produce particular outcomes, although without a divine force. He further asserts that “almost everyone in our secular culture has been browbeaten into regarding the reductive research program as sacrosanct.”

The controversial argument has created unexpected bedfellows. Famously liberal and atheist, Nagel has seen his book garner accolades from conservative publications and supporters of intelligent design theory. Conversely, scientists and some of Nagel’s fellow philosophers have expressed doubts about the book’s reasoning.

In the New Republic, Christian philosopher Alvin Plantinga called Mind and Cosmos an “important new book” that critiques “some of the most common and oppressive dogmas of our age,” and in the Wall Street Journal philosopher Jim Holt wrote that Nagel “offers a sharp, lucidly argued challenge to today’s scientific worldview.” The National Review deemed the book “a work of considerable courage and importance.” On the other end of the spectrum, Brian Leiter and Michael Weisberg offered in the Nation that “the subtitle seems intended to market the book to evolution deniers, intelligent-design-acolytes, religious fanatics, and others who are not really interested in the substantive scientific and philosophical issues” and suggested the book would be “an instrument of mischief.” A sympathetic Guardian piece nonetheless pronounced Mind and Cosmos “the most despised science book of 2012.”

Some critics had less polarizing reactions. Alva Noë of NPR invoked the book’s importance in prodding scientists and philosophers to dig deeper: “If we are to resist Nagel’s call for a radically new conception of fundamental reality…we need to do better than merely defend the status quo.” Through the uproar, Nagel himself has remained silent, preferring to leave his published arguments to speak for themselves.