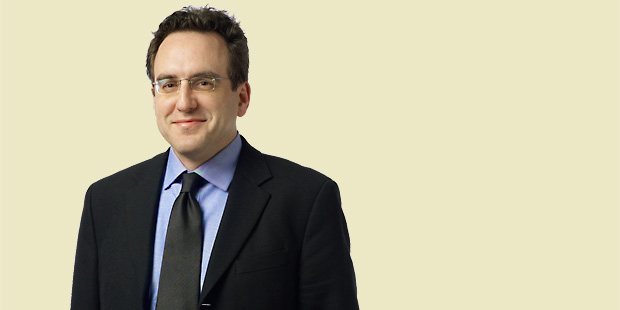 Nix the bookshelves; pump up the tech budget. That’s what Barton Beebe requested for his new Vanderbilt Hall office. All that Beebe really needs to feel at home are two 30-inch monitors and a computer powerful enough to handle his high-tech needs. “I do everything as paperless as possible,” says Beebe, who plans to bring just one box of files when he leaves Benjamin N. Cardozo School of Law to join the NYU School of Law in September. A trademark, copyright, and intellectual property law scholar, he’s convinced that technology has taken society to the point where the intangible is more valuable than the tangible: “I have my library in a hard drive rather than in some giant wall of books.”

Ninety percent of everything he’s read since he started teaching is ensconced on his Tablet PC—a laptop with an interactive touch screen. “It’s a lot easier than remembering where I filed a sheet of paper,” he says. He uses two external hard drives, one off-site backup server, and a desktop computer fueling two hard drives that are mirror copies of each other. His system automatically backs up his work every three to four hours, creating four to five copies. “If you go paperless, you’ve got to have that mentality,” he says.

Beebe, 39, named Cardozo’s Best Professor in 2007, is beloved by his students, who see him as an eccentrically humorous intellectual with a well-coiffed plume of hair—“a theorist in a sea of practitioners,” says Cardozo alumnus Jacob Wentworth, who took three of Beebe’s courses. “He’s really interested in what he’s doing, and can really geek out about it,” adds Erin Simon ’09, who took his Intellectual Property and Globalization seminar last fall when Beebe was a visiting professor.

Beebe doesn’t like to cold-call on students, yet “he gets people to participate without putting them on the spot,” says Matthew Turk ’10. “It’s not easy to get the right dynamic in a 20-person seminar,” Turk adds, “but he struck the right balance between encouraging discussion and presenting information.”

Beebe’s work is known for its versatility. “Barton’s scholarship shows extraordinary range, from high theory to detailed empirical work that challenges some well-settled assumptions, particularly regarding fair use,” says intellectual property professor Jane Ginsburg of Columbia Law School. In “An Empirical Study of U.S. Copyright Fair Use Opinions, 1978-2005” (Pennsylvania Law Review, 2008), for example, he delved beyond headline cases, reading 306 opinions three times each to determine which factors actually drove judicial outcomes. “Coding the opinions took forever,” Beebe says. But colleagues say the results were worth the effort. “It’s the most refreshing and informative fair use article I’ve ever read,” says Pamela Samuelson of the University of California, Berkeley, School of Law. The conventional wisdom is that the commercial nature of a reputed fair user would undermine a fair use defense, she explains. “Beebe shows that isn’t so.”

In a completely different vein, Beebe’s forthcoming article “Intellectual Property Law and the Sumptuary Code” (Harvard Law Review, 2010) explores the use of intellectual property law to suppress the social and cultural implications of copying technology. Much of our consumer culture is based on the consumption of rarities such as diamonds, he says. But copying technology is becoming increasingly quick and cheap. “We can no longer rely on nature to enforce the conditions of rarity,” he explains, “so we’ve got to enforce those conditions ourselves, and we’re doing so through intellectual property law.”

Growing up, Beebe and his sister, Brooke, moved frequently to wherever their architect dad, Red, was needed to build a city’s transit system. Their mom, Nancy, now deceased, was a public school special education teacher. Beebe spent his middle school years in Houston, where football was the rage, and hated every minute of it. “When everyone was cheering for the football team and I couldn’t care less, I felt a real sense of estrangement,” says Beebe, who was a debater. “It wasn’t my world.”

The family moved to Oakland, California, during Beebe’s first year of high school, and life turned around. He fell in love with the city’s natural beauty and the intellectual atmosphere of his small private school. Despite taking some ribbing about his Lone Star twang, Beebe thrived, since debate was as cool there as football had been in Texas.

Beebe then went to the University of Chicago, soaking in the intellectual rigor of the school’s core curriculum, which focuses on the so-called “great books” of the Western canon. Graduating in 1992 with a B.A. in literature, he won a German scholarship, followed by a Whiting Fellowship in the Humanities while doing graduate work at Princeton University.

In 1998, he earned his Ph.D. in literature, but had become dismayed by the impact literary theory was having on the academy: “There was a lot of sophistry and theoretical jargon.” By comparison, he says, “law seemed so much more worldly, and I was attracted to the rigorous, pragmatic nature of legal thinking.” His debating skills made for a smooth transition to Yale Law School, and his literary studies naturally led him to copyright law. He earned his J.D. in 2001, and started teaching at Cardozo after a federal clerkship and a stint at Debevoise & Plimpton.

When Beebe visited the Law School, he liked what he saw. “It’s like a cruise ship,” bustling with activities, he says. “There’s something on Lido Deck 3 and something else in the Venetian Room on 4. You just can’t keep up.”

Beebe is married to Amrit Singh, an ACLU attorney. They live uptown with their rescue dog, Biba, bicycle together in Central Park, and travel twice a year to India—Tablet PC in hand. Says Beebe: “I can work in Central Park, along the Hudson, or in a garden in Delhi.”