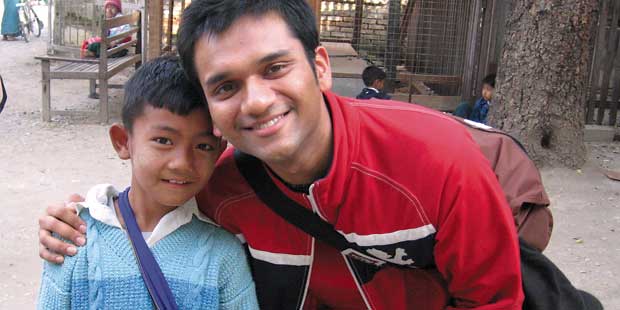 A Man with Many Plans

As an undergraduate majoring in international relations and Middle Eastern and Islamic studies at NYU, Anurag Gupta ’11 became concerned with the plight of the Burmese people. Typically, Western nations exerted pressure on Myanmar’s longstanding military regime through boycotts. But to Gupta, that didn’t compute: “The regime was still getting money from other countries; the people were the ones who were suffering.”

A few years later, while he was on a Fulbright grant, Gupta and some fellow Fulbright scholars founded Opening Possibilities Asia (OPA), a nonprofit that creates educational opportunities in Myanmar. Partially funded by a Goldman Sachs Global Leaders Program grant, OPA has improved the lives of 7,000 students at Phaung Daw Oo, a Mandalay charitable school run by Buddhist monks.

The changes are astonishingly simple. OPA put garbage bins, for instance, in all 200 classrooms so students no longer had to step over refuse on the floor. And it furnished the library with Burmese-language books where previously only English volumes filled the shelves. Gupta also organized teacher training workshops to foster peer support, introduce creative techniques for teaching and motivating students, and tackle common classroom issues.

Eager to advance his nonprofit management acumen, Gupta earned a master’s in development studies at Cambridge. He then became a Root-Tilden-Kern Scholar at NYU Law, where he honed essential entrepreneurial and development skills.

Fellow RTK Scholar Keren Raz ’10 recalls telling Gupta, then a 1L, about NYU’s Reynolds Foundation Program in Social Entrepreneurship, which seemed tailor-made to his interest in addressing huge societal issues outside the limitations of a traditional nonprofit structure. Although it was the day before the application deadline, Gupta pulled an all-nighter and became one of eight fellows accepted out of 1,000-plus applicants. The two-year, University-wide program provides up to $25,000 annually, along with cross-disciplinary skills training. “The Reynolds Program has been transformative in helping me really appreciate what a law degree is,” says Gupta. “It’s changed my way of looking at the world.”

Adjunct Professor Jill Manny, who taught Gupta in her Law of Nonprofit Organizations class, attributes his success to intense focus. Manny, executive director of the National Center on Philanthropy and the Law, also encouraged him to apply for the highly competitive Rockefeller Brothers Fund Fellowship in Nonprofit Law, which he won over “an enormous crop of incredible candidates,” she says. For the yearlong fellowship, Gupta will work for the Vera Institute of Justice’s general counsel on issues related to immigration, youth justice, racial justice, and prosecution reform.

Still maintaining a focus on Myanmar, Gupta recently completed a business plan for a social enterprise that would help Burmese expatriates worldwide learn to start businesses. As Gupta sees it, a thriving diaspora eventually will improve the conditions of those still living there.

Professor Helen Scott, co-director of the Mitchell Jacobson Leadership Program in Law and Business, helped supervise Gupta’s business plan draft. Like many others, she sees great promise in Gupta: “There are a lot of students here who want to change the world. And there are some who will. But he’s one of the ones I would put money on, that he will, in fact, change the world for the better.”