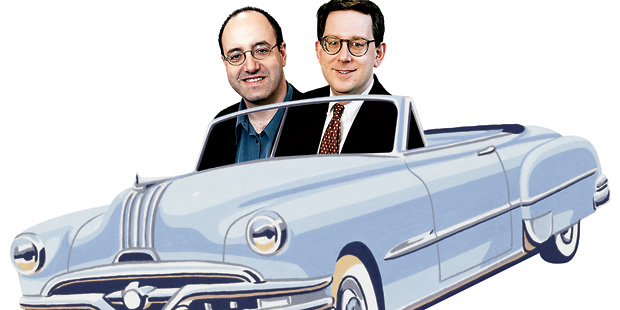 It is extremely unusual when two leading law schools choose outside deans in a single year and extraordinary if both come from the same institution, but this year the Law School saw two faculty members take deanships, both at California schools. Larry Kramer, Associate Dean for Research and Academics, and the Russell D. Niles Professor of Law became the dean of Stanford Law School this fall. Michael Schill, the Wilf Family Professor of Property Law and Professor of Urban Planning, and the Director of the Furman Center for Real Estate and Urban Policy, became the Dean of the Law School at the University of California, Los Angeles, in August.

Since he joined the Law School in 1994 from the University of Michigan Law School, Kramer (left) has distinguished himself with first-rate scholarship on constitutional law, including his recent book, The People Themselves: Popular Constitutionalism and Judicial Review, published by Oxford University Press. In announcing Kramer’s departure, Dean Revesz said, “He has been a terrific teacher and mentor for our students, and has devoted enormous time and energy to improving the quality of our students’ educational experience. He has been essential to—indeed, he was often the architect of— both our efforts to build the best faculty in the nation and our work to ensure that the intellectual life at NYU is unparalleled.”

“This is a very special place, much greater than the sum of its parts,” said Kramer, who is excited about his move to Stanford but also sad about leaving a place he cherishes.

Schill (right), a nationally recognized expert on American housing law and policy, has written or edited three books and more than 40 articles on various aspects of housing policy, deregulation, finance, and discrimination. He joined the Law School in 1995 from the University of Pennsylvania.

Dean Revesz commented, “Professor Schill has been a leader in building the Law School, launching the Furman Center for Real Estate and Urban Policy, which has produced influential empirical studies of housing policy, and sponsored numerous conferences, panels, and roundtables that have enriched the educational experience of our students and our community.”

In his message to the Law School community announcing his departure, Schill said: “I don’t think it is an accident that two great law schools chose NYU professors when they were looking for deans this year. NYU is the finest law school in the nation— the special blend of academic excellence, intellectual striving, innovativeness, and engagement in the community is unique among American law schools.”