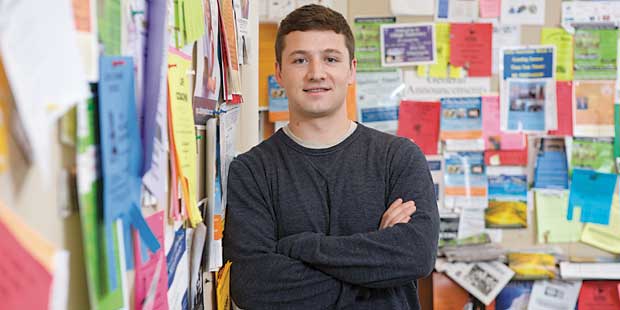 Man and Music in Harmony

Eli Northrup’s activities are as diverse as his iPod playlist. Just as he listens to jazz, bluegrass, pop, and punk, the Arthur Garfield Hays Civil Liberties Fellow and Review of Law & Social Change staff development editor was also captain of this year’s victorious Deans’ Cup basketball team and a member of the rap/hip-hop band Pants Velour, which he started in 2006 with two Cornell undergraduate classmates. “I want to be a lawyer,” says Northrup ’11, “but I don’t feel like I need to be just one thing.”

Pants Velour performs in quintessential downtown clubs such as Arlene’s Grocery and Webster Hall. Onstage, Northrup is the hype man who accentuates the last words of the lead rapper’s lines and plays to the crowd to get them excited throughout the show. “I’m there to have a good time,” says Northrup.

Northrup, who once played piano and guitar, co-writes the band’s catchy songs. A video of his parody rap, “Charlie Sheen: Always Winning,” which lampooned the actor’s highly publicized antics after he was fired from his top-rated sitcom last winter, has been seen more than 355,000 times on YouTube and caught the attention of the national legal community. The blog Above the Law posted the video, while the Am Law Daily’s Careerist blog called it “fast and saucy—especially amazing coming from a serious law student.”

Within Law School circles, Hays Faculty Co-Director Sylvia Law ’68 counts herself a fan, having attended a gig, while Co-Director Helen Hershkoff donated a Pants Velour prize package to this year’s PILC auction. Northrup’s Criminal and Community Defense Clinic professor, Anthony Thompson, appreciates how music has enhanced Northrup’s legal skills. “Hip-hop has given Eli a unique perspective as a lawyer,” he says. “It gives him a broad knowledge of both creative and diverse communities.”

Northrup agrees wholeheartedly. “It’s easy to get into a routine where you just interact with other students and lose sight of what people are going through,” he says. “Not that musicians are the most down-toearth group, but a mix of the two worlds keeps me closer to reality.”

That reality is what set Northrup upon his legal career path. After graduating from Cornell, Northrup volunteered with the DREAM Project in the Dominican Republic, where he taught preschool, ran a library, and taught basketball and swimming. He also witnessed racial tension between Dominicans and their Haitian neighbors. “Haitian immigrants were essentially treated as undeserving of rights or protections,” Northrup says. “They had no voice, and that disturbed something in me.”

As a Hays Fellow working for the NAACP Legal Defense and Educational Fund (LDF) this year, Northrup says he has also witnessed similar underrepresentation in the criminal justice system, as he had already seen while working in public defender offices. The LDF’s client is a 25-year-old Mississippi man who, at 16, drove two older teens to a store where the pair robbed and killed the owner. The client, who had remained in the car, was convicted of capital murder and sentenced to life in prison without parole.

Northrup’s ease in chatting about music and basketball helped him find common ground with the client. “I can see how much of an uphill battle it is for anyone accused of a crime,” Northrup says. “It’s that sense of frustration and helplessness that I want to work toward alleviating as a lawyer.” In May, after researching similar cases involving juveniles convicted of homicide, Northrup helped draft a brief filed in Mississippi State Court arguing that the client’s sentence was disproportionate and thereby violates the Eighth Amendment. If relief isn’t granted, a federal habeas petition will be filed in federal district court.

This fall, Northrup is clerking for U.S. District Judge Robert Patterson of the Southern District of New York, and he will somehow still find time to perform and write music with Pants Velour. Hershkoff, for one, expects no less: “One of the things that distinguishes Hays Fellows is their ability to combine a passion for something outside the law, like artistic expression, with their practice of law,” says Hershkoff. “Eli is a renaissance person.”