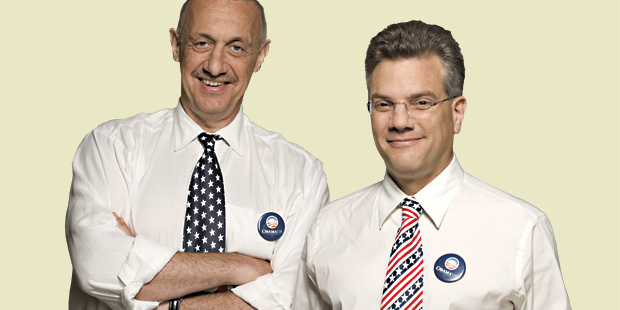 An Inside View on History

During the primaries and the general election season, professors Samuel Issacharoff and Richard Pildes worked as part of the Obama campaign’s legal team on voting and election issues. As a professor at the University of Chicago Law School, Obama taught from Issacharoff, Pildes, and Pamela Karlan’s 1998 casebook, The Law of Democracy, and had met with Pildes to discuss ideas during its creation. Issacharoff began his legal career by being part of a successful lawsuit that eventually led to the election of Mike Espy, the first African American congressman from Mississippi in the 20th century. After the historic 2008 election, the two wrote a letter to the Law School community on their experiences, excerpted below.

On election day and the days leading up to it, we were in the “boiler room” at campaign headquarters in Chicago, where we worked to monitor voting issues that arose around the country and to respond to any systemic problems that might require legal intervention or a response to legal intervention initiated by others.

One striking aspect of this experience was how well-organized the Obama campaign was. It would be hard to imagine a more sophisticated and well-run structure for oversight of these issues. Without giving away any secrets about exactly how this was done, we can say that we were aware of every potential problem at polling places throughout the battleground states. This awareness ranged from minor details, such as polling places that ran out of pens, to more significant ones, such as challenges to the eligibility of individual voters to vote. Some of these issues tested the commitment of citizens, as with the long lines in Virginia. Some had the quality of bizarre melodrama, as with the polling sites in Washington State that ran out of provisional ballots in English and tried to make do with the ones printed in Chinese. Through it all there was the captivating commitment to democratic values that filled even a room of tired and strained lawyers with admiration and respect.

The professionalism of the campaign’s entire culture, from top to bottom, was also impressive. We were at the top of a pyramid of information coming in, much of it mediated by campaign workers, often in their 20s. It was obvious they had internalized the campaign’s codes: no drama, stay in your own lanes, calm professionalism, and no leaks. Working within such a culture was a pleasure and made our work as smooth as possible—despite physical quarters that consisted of a small room with five thrown together card tables for 15 people in a building with concrete floors that quickly covered our clothes with dust.

We are all fortunate there was no legal confrontation that rose to the level of the 2000 election. But there was a great deal of legal activity that mostly flew below the radar. There were cases brought by the political parties or outside groups on election day and the days right before in Ohio, Indiana, Virginia, New Hampshire, Pennsylvania, and New Jersey (the latter concerning election procedures in New Mexico). And of course, on election day we had to approach every potential issue as if the election’s outcome could turn on it.

Being in Chicago’s Grant Park on election night to witness Mr. Obama’s victory address was the most moving experience of our professional lives.