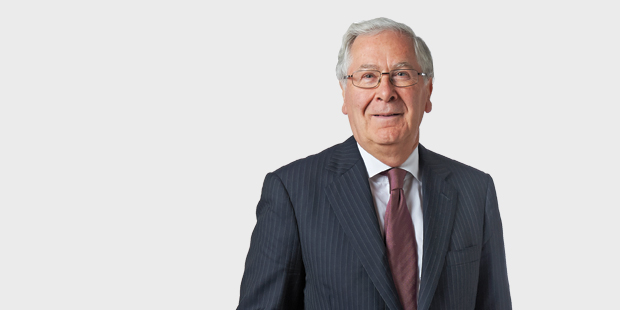 Professor of Economics and Law

You’d think that after safely steering the British economy through the biggest financial crisis since the Great Depression, Mervyn King would spend his first year of retirement taking things easy—tending his garden, luxuriating in his library, cheering on his favorite cricket and soccer teams. Instead, the former governor of the Bank of England is moving to New York to teach economics and law.

“It’s the intellectual excitement,” King explains. (A note about how to greet him: His title, given in 2013 in recognition of his distinguished public service, is Baron King of Lothbury, so he is formally addressed as Lord King. But he urges people to call him Mervyn.) “NYU is a unique law school because it brings together people of different disciplines to understand how different institutions operate. To understand many of the issues which affect the monetary system, it’s crucial to understand the legal framework in which banking has grown up. I have a lot of experience to reflect on some of those issues.”

Indeed he does. Born in 1948 to a railway worker and his wife, King studied at King’s College, Cambridge, and Harvard (as a Kennedy Scholar), then taught at Cambridge and Birmingham universities. He also served as visiting professor at both Harvard and MIT (where he had an adjoining office with future Federal Reserve Chairman Ben Bernanke). After teaching at the London School of Economics, where he co-founded the Financial Markets Group in 1987, King was offered the opportunity in 1991 to put economic philosophies into practice as chief economist of the Bank of England. He was appointed governor 12 years later.

While he easily qualified as one of the smartest guys in the room, King “was never an academic prima donna,” Bernanke says. One reason, Bernanke hypothesizes, is that King moved out of academia and into policymaking relatively early in his career. “The world of policy, where you’re trying to deal with the complexities of what’s happening in the economy and the markets,” he explains, “is messier and, consequently, tends to induce more humility in its practitioners.”

King attributes his clarity amid the confusion of the crisis to the fact that he is a history buff. He notes that events that occurred more than 200 years ago still have relevance, such as Alexander Hamilton’s idea of a central bank that would assume individual states’ debts and talk in European financial circles recently about whether that could work in today’s eurozone. “My interest in history was a big antidote to thinking that mathematical models explain everything,” he says. “They’re very important, but they’re just tools of the trade.”

That’s only one of the lessons King looks forward to teaching would-be policymakers in his 12-session seminar, Money and Modern Capitalism: Law and Business. Yet even though he is aware that overreliance on mathematical models can lead to a myopic mindset, he notes that “it’s very helpful to have an intellectual framework in which to think about policy questions, and that framework is economics.” During the financial crisis, he points out, “people who were trained in economics and were doing economic policy had a clear intellectual framework that allowed them to think through the issues and come up with answers.” Those without a background in economics risked approaching each question as a one-off issue rather than seeing the bigger picture.

“I suspect he’ll be a very popular teacher, because he’s able to explain complicated ideas in an accessible and entertaining way,” Bernanke says.

“I’ve read a few of his speeches; they’re quite unusual for a central banker. They’re not dry and technical, like my speeches.”

Known for his wide range of interests, King frequently sprinkles his speeches and lectures with references to cricket, music, art, and his beloved Aston Villa soccer team. (When he was interviewed for the BBC’s popular Desert Island Discs program, one piece of music he chose to listen to if marooned on an island was a song cheering on Aston Villa to victory in the 1982 European Cup.) “Regardless of background or education, people can be touched by a painting or a piece of music or sport,” King explains. “All three can bring people together, and that is important.”

Since retiring from the Bank of England, King has picked up a new hobby: With his wife, Barbara Melander, King has been taking lessons in fox trot and swing dancing. Will he be tempted to compete on Dancing with the Stars? “No, no,” he demurs. Then, demonstrating his much-lauded analytic skills and judgment, he adds, “That would be far too risky.”