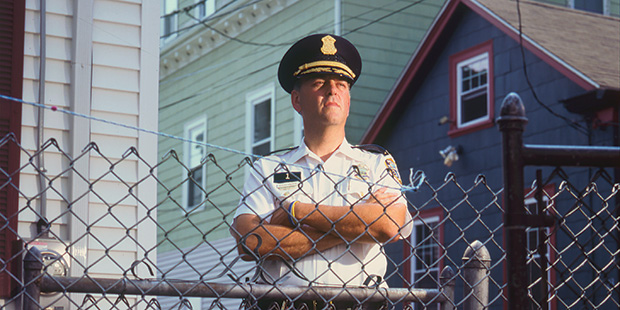 A Guardian of Providence

One horrific night in April 2005, four people, including a police detective sergeant, were shot in Providence, Rhode Island. The perpetrator was in one hospital room while the dying officer lay a few doors down. Police Chief Dean Esserman ’83 stationed a guard outside the shooter’s room, “setting a moral tone: We don’t hurt the person who did it,” says Teny Gross, executive director of the city’s Institute for the Study and Practice of Nonviolence. And Esserman stayed by the officer’s side all night.

Since taking office in January 2003, Esserman has exhibited a compassionate leadership style, showing up at nearly every homicide scene and at every wake. “He shows that we care tremendously when someone gets hurt in this city,” says Gross.

A one-time lawyer and a friend of former NYC Police Chief William Bratton, Esserman is credited with cleaning up a corrupt department and cutting crime. “He’s a consensus builder,” says Bratton, now head of the Los Angeles police. “He’s a listener. He’s an inspirational leader, and he’s liked by the community.”

When Esserman arrived in Providence, the police “had become a king’s army,” he says, in which the former mayor—convicted of racketeering conspiracy—controlled the police force with cronyism and payoffs. Positions and promotions could be bought for $3,500 to $5,000.

David Cicilline, the new mayor, gave him carte blanche. “I had the entire command staff retire, and I promoted great people who never played the game to get ahead,” says Esserman. One of his first actions was to decentralize—dividing the city into nine districts with a neighborhood police substation in each. He also embraced the community policing model in which cops walk the beat to identify neighborhood concerns and consult the appropriate social service agencies. Equally key, he adopted the weekly CompStat (computer statistics) strategy meetings that Bratton had used in NYC, tracking crime and holding precinct commanders accountable for bringing the numbers down.

Results-oriented and innovative, Esserman launched successful programs to combat drugs and violence: One gives corrigible drug offenders a second chance, and another created a gun task force after a 14-year-old boy was shot by a friend.

Providence has seen a steady drop in violent crime since Esserman took office. According to figures provided by Providence officials, murders were above the national rate in 2002 and reached par by 2007, a 39 percent drop. Rape fell 64 percent; robbery dropped 30 percent, and aggravated assault, 17 percent. “The police department in Providence is helping to bring crime rates down at a time when, across the nation, crime rates are stubbornly stable,” says Andrew Karmen, criminologist at John Jay College.

Esserman was raised in a progressive Jewish home in Manhattan that became “a salon” on weekends, filled with musicians and artists whom his physician dad treated for free. Every summer his father volunteered in developing nations and took his family along. “That’s how I learned about service,” says Esserman. He vividly remembers helping his father stitch up a Guatemalan man’s arm that had been sliced open with a machete, and decided to follow his dad into medicine.

In high school at the Ethical Culture Fieldston School, he trained as an EMT and volunteered in the Central Park Medical Rescue unit. He realized that police are the first responders at most accidents, and should be trained as medics. “For police to see themselves simply as law enforcers misses the point,” he says. After entering Dartmouth College, he created a medical rescue unit for the NYC Transit Police, and raised enough money to send officers to Dartmouth to study Spanish.

Esserman nonetheless dropped medicine and graduated from Dartmouth in 1979 as a history major. A year later, he entered NYU School of Law: “NYU was the doorway to the beginning of my career as a prosecutor, which started my career in law enforcement.” In 1987, Esserman left the district attorney’s office to become general counsel to the NYC Transit Police. Bratton became chief of the transit police in 1990, and their two years together would prove deeply transformative. In 1991, Esserman made the unprecedented move to police work. “He liked the nuts and bolts of policing and understood he could make more of a difference,” says Bratton.

Esserman landed a job as the assistant police chief in New Haven, Connecticut, and entered the police academy. “I was the oldest recruit and the highest ranking,” Esserman says proudly. He graduated in 1992, the year he married Gilda Hernandez, a detective turned school administrator. They have three children.

Esserman now earns $158,000 a year as police chief—slightly less than a first-year associate at some of the large firms. “I don’t regret that, not even for a minute,” he says. “I’ve been shot at. I’ve put handcuffs on a lot of people, and I’ve delivered eight babies. I’ve done a lot more than I thought I would when I put on that uniform way back when.”