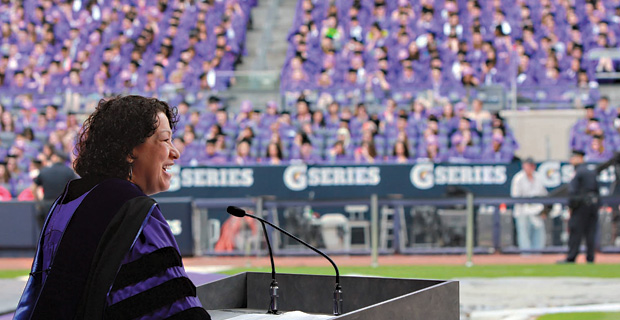 Having grown up in a South Bronx housing project a few miles from the old Yankee Stadium, U.S. Supreme Court Justice Sonia Sotomayor seemed noticeably moved by the honor of delivering NYU’s 180th Commencement address at Yankee Stadium on May 16. A former adjunct professor at the Law School, she also received an honorary Doctor of Laws degree.

Kenji Yoshino, Chief Just ice Earl Warren Professor of Constitutional Law, introduced the justice to the enthusiastic crowd as ï¿½a self-described and proud Nuyoricanï¿½ and ï¿½an early and awesome achiever.ï¿½ Sotomayor, however, said in her address, ï¿½Nothing in my childhood hinted to me that I would be in a position someday to stand on this field and speak to such a large crowd.ï¿½

Continuing in this personal vein, Sotomayor reflected on the simultaneous feelings she was experiencingï¿½humility, excitement, challenge, gratitude, and engagementï¿½and drew parallels between her own life and the lives of those graduating. She also spoke of her deep affection for New York City. ï¿½Having been a part of the fabric of this city, you will always carry its energy inside you,ï¿½ she said. ï¿½And the city will challenge you to do big things, to accomplish as much as you can, to work at bettering the world in every way you know how.ï¿½

Sotomayor urged graduates to embrace challenge and the attendant fear: ï¿½Being a little frightened, as I have been taking every step in my life, including becoming a Supreme Court justice, is natural and unavoidable. But being hopeful and remaining open to the joy of a new experience can counterbalance that anxiety and help you meet each new challenge.ï¿½

Her ultimate message was of service to others: ï¿½Neither your life nor the world you live in just happens. You control the quality of your lives and your communities. It is only in giving to others that you can find meaning and satisfaction in what you do.ï¿½