As a proud interdisciplinary child of the comparative literature and performing and media arts ilk, I get excited about a great many ridiculous things. When authors shout to one another across generations—transgressing borders and sailing over boundaries—I get excited. When films reference their literary counterparts or echo significant moments in our architectural, artistic, or symphonic canons, I get excited. When an apathetic discussion of a 7-Eleven video camera slowly creeps toward a veiled inquiry of Bentham’s panopticon, I get excited. 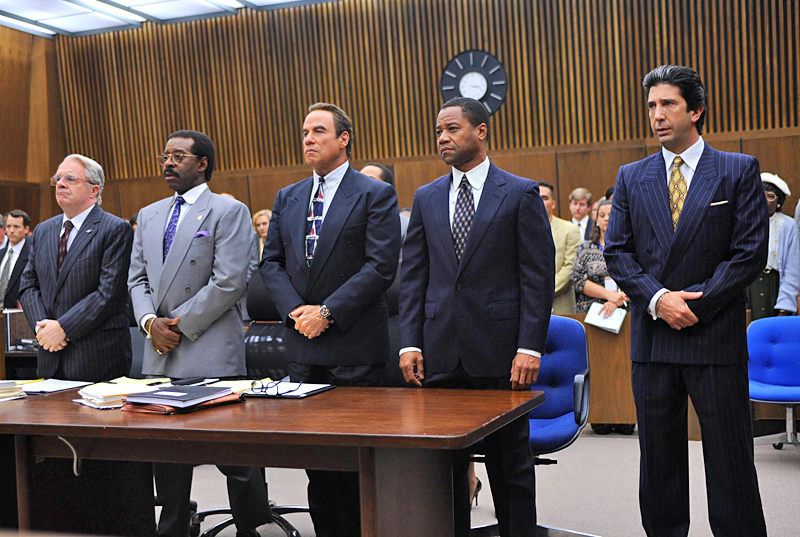 That is precisely why, when I read FX’s logline for the 2016 season of its serial crime anthology, I knew immediately how my spring break was going to unfold: thread by thread, frame by frame, and moment by moment. In prototypical Hollywood fashion, the logline is desperately underwhelming: “After the bodies of Nicole Brown Simpson and Ron Goldman are discovered, police finger O.J. as a suspect and prosecutor Marcia Clark takes the case.” As far as loglines go, this dreary limerick is particularly insipid.

Yet the series itself is riveting, both as a piece of binge-worthy entertainment and as the tip of a match. The show marries narrative; fiction; truth; spectatorship; media; consumer culture; and the nature of our nation as a body of people, a body of histories, and a body of laws. The complex fabrication of the story—as localized and as framed—makes me very, very excited.

Fictionalization is a powerful tool and a powerful weapon. The People v. O.J. Simpson capitalizes on the strength of fiction in capturing an audience in the writing, structure, and development of character. Emphasized by pristine shots, romantic frames, and decadent sets and costumes, the show demands the creative spectatorial participation we usually associate with purely invented plots. Nevertheless, given the truly notorious nature of O.J. Simpson, Robert Kardashian, and the interminable trial as a whole, the show remains shrouded in a veil of inextricable truth, hesitancy, and doubt. Within the tension between fiction and feigned truth, we see a generational divide. As a naive twenty-three-year-old, I approach the show with a willingness that reflects my ignorance, my curiosity, and my youth. My experience is not uncommon, nor does it operate in solitude. While I am happily enjoying this pseudo-fictitious world created by the masterminds at FX, my parents (who lived through the media-monstrosity that was the O.J. Simpson trial) have an entirely different experience. Their knowledge of the events, experience of temporal synchronicity with the events, and understanding of the events fundamentally change the way in which they approach the television show. To them, the fiction seems pained, painted, and perhaps plasticky.

From this we gather two important points: 1) FX is catering to a binge audience to which I semi-proudly belong, and 2) the dance between fiction, trauma, and truth creates a particular specimen of spectatorial participation that is slightly different from, say, pure documentary or fantasy. The nature of the doubt, the hesitancy, and blurry lines between truth and hyperbole demand a particular kind of engagement on the spectator’s part. We are invited to doubt, to question, and to parse. On numerous occasions, while watching with friends, we pause to Wiki the trial. Did the glove fit? What did the Fuhrman tapes really reveal? Why did Robert Kardashian deactivate his license, and where did Cochran go to law school?

This unique breed of spectatorial participation is critical, because it invokes a technique blatantly and unapologetically to encourage the binge to which it caters. In carefully balancing truth and fiction, the series coaxes the audience to actively participate in a way that disincentivizes abandonment. The show is not only made for the audience of today and the platforms we prefer (cough, Netflix, cough), but it is structured, written, and captured for the way we consume media. I shall leave the social commentary on the meta nature of the series’ own structuring and the simultaneous portrayal of media within that narrative structure for another day. Suffice it to say, FX employs the medium of television itself to maximize consumer consumption in a unique and unexplored way: in making us doubt its own truthfulness.

I end with a question (for fear of invoking a thesis): The O.J. Simpson trial garnered fame not only because of the celebrity of the accused and the victim, but also because there was an accused and a victim. We cannot help rubbernecking, being engaged by acts of brutality or abnormality, and we all entertain a certain degree of voyeurism. What role does such consumption of another’s pain play in our curiosity and enjoyment of the show? Does the fictitious “spin” of The People v. O.J. Simpson ameliorate the potential for guilt in binge-watching a show that cautiously avoids the victims while allowing for campy and caricature performances of “The Dream Team” (Travolta…)? What does The People v. O.J. Simpson have to offer in studies of manifestations of trauma onscreen?

And finally, why have you not watched this show yet?

Being Involved in Campus Life as a Transfer: Is There a Place for You?